Գլխաւոր   |   Uncategorized   |   Long-awaited Housewarming in the Borderline Village of Movses

Long-awaited Housewarming in the Borderline Village of Movses 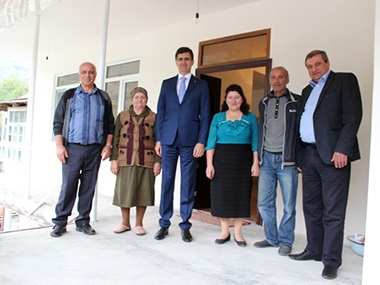 In Movses village of Tavush region locked doors and bullet dents are at every step. Deeply connected to their homeland, the villagers, however, continue to live, work and create under shootings.

The Avalyans are among the old residents of the village. Their house was destroyed by the earthquake. All these years Artak, the father of the family, has tried to construct a new house together with his three sons: stone by stone, they have raised the walls, done the roofing, but had to stop the construction because of the lack of financial means. To earn money for resuming the housebuilding Artak’s sons had to leave the country to work abroad and are still there. In the spring of 2015 the Avalyans were included in the housing project financed by VivaCell-MTS and implemented by Fuller Center for Housing Armenia, according to the press service of VicaCell-MTS.

The construction of Avalyans’ house has been finished. VivaCell-MTS General Manager Ralph Yirikian and the President of Fuller Center for Housing Armenia Ashot Yeghiazaryan have participated in the housewarming of the Avalyan family sharing the joy of the homeowners.

“Constructing a house before the enemy’s very eyes is one of the best ways of defeating him. It translates the message that the Armenian will continue living and working in his homeland, and will not let the desire of the enemy to see the village deserted come true. The fact of living in a borderland village has made the residents of Movses more agile and enduring. We are here to celebrate the housewarming of the Avalyans and give other families confidence in their future. We are with you at all times,” VivaCell-MTS General Manager Ralph Yirikian said.

“Back in spring it was hard to believe that the construction of our house will be finally completed, and the hope that my sons will come back to their homeland to strengthen its borders will be revived. You gave us not only a new house, but also a new future,” Artak Avalyan, a resident of Movses village said
11 families of Nerkin Karmiraghbyur, Movses and Aygepar villages of Tavush region have been assisted through the housing project in 2015.

“In borderline villages where the residents have to live under the constant danger of shootings, it is hard to find reasons for joy, so we try to create them whenever possible. In these hard times each of us tries to look into the future, think and find solutions. I think the home is the root that connects a person to his land. I hope that from now on the happiness of this family will only be multiplied, and this house will become the beacon that will bring the pilgrim sons home,” President of Fuller Center for Housing Armenia Ashot Yeghiazaryan said.

To remind, in 2015 VivaCell-MTS invested AMD100 million (AMD 55 million in 2014) for the realization of the project, and Fuller Center for Housing Armenia has undertaken its implementation. Through this partnership, from 2007 up to now, 53 families from different communities of the republic already have been provided with decent homes. Till the end of the year the number of the families having their houses renovated or the construction of the half-built houses completed will reach 93.