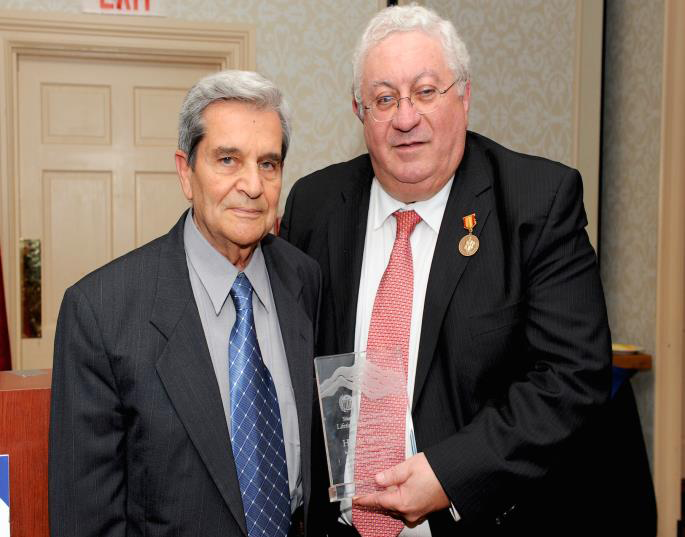 The Tekeyan Cultural Association (TCA) paid tribute to one of its own, Hagop Vartivarian, to mark the 45th anniversary of his activities in the Armenian Diaspora, at a banquet on June 21, to dovetail with the TCA convention.

About 350 people attended the banquet, held at the Clinton Inn, to pay tribute to Vartivarian for his many years of activity within the Armenian Democratic Liberal party, the TCA as well as supporting the Armenian Church and culture at large.

The program felt both like a national-level event and a family reunion. Unity and celebration were the theme, bringing together people from across party lines. During the program, Vartivarian received the St. Sahag and St. Mesrob medal from the Primate, Archbishop Khajag Barsamian, on behalf of the Catholicos of All Armenians Karekin II. In addition, Armenia’s new ambassador to the United Nations, Zohrab Mnatsakanian, presented the Movses Khorenatsi Medal to the honoree on behalf of President Serge Sargisian.

Among those offering remarks about him were his son, Haig Vartivarian, and brother-in-law,Anthony J. Principi, the former secretary of the Veterans Administration, as well as his brother, Dr. Zareh Vartivarian, from California. His son said, “We are all here to recognize him. He has traveled across North America, South America, Europe and Asia and befriended thousands of Armenians, always meeting Armenians. I am programmed to say, ‘Parev, Hay em. Hagopi tghan em.’” (Hello, I am Armenian. I am Hagop’s son.) Dr. Zareh Vartivarian said that the evening was “one of the most memorable nights for me. He and I are far away in terms of distance, but together through our souls.” He also thanked all those attending for honoring his brother, adding, “Hagop is not a person, he is an institution.” Principi, the brother of his wife, Maria, said he was delighted to pay tribute to his “brother, Jack.” “My family and I share your pride in his accomplishments. He is the kindest and most intelligent man I have ever met. I have enjoyed the time we sat together over good Cognac to talk about art,” he added. “When you visit Jack and Maria’s home, you eat well and drink well and they send you home with leftovers.”

He paid tribute to the honoree and his wife for taking care of Maria and Anthony Principi’s mother until her death. “The Jack I know is all about family. Jack and Maria took care of our mother. Jack was adamant that she belonged at home.” He also referred to the traumatic history of the Armenian people, who, like Italians, are family oriented.

Dr. Vaghenag Tarpinian, chair of the Tribute Committee, was the first to speak. He paid tribute to the honoree in both English and Armenian, as someone who had done his utmost to create further cultural ties between Armenia and the diaspora. “I appreciate the person and the talent” of Vartivarian, who is “ready to move mountains to reach his goals.”

Edmond Y. Azadian, vice chairman of the TCA Central Committee, offered one of the keynote addresses about Vartivarian. “His stature in the community and his impressive achievements command respect. That is why we are gathered here to extend our tribute to him, thereby recognizing his valuable contributions to the Tekeyan Cultural Association and the Armenian community at large.” He added, “On behalf of the Central Board, it is my distinct pleasur and privilege to congratulate Mr. Vartivarian on the 45th anniversary celebration of his multifaceted activities in the Armenian community. No one on our Central Board needs to be offended when we state that Hagop is the most active member of that Board.”

Azadian also alluded to the rift in the ADL that for a while had seen him and Vartivarian in opposing camps. “After years of intense cooperation, division in our organization threw us into opposite camps. Hagop even resorted to the extreme. He honored me by publishing a bi-weekly journal targeting my deeds and misdeeds. I never took it personally because I believed what he was doing was out of conviction, for the good of the organization. On the contrary, he was holding my toes to the fire to do the right thing. Perhaps, in a perverse way, I was even gratified for having an adversary as honest as Hagop as I am proud today for having a friend so dedicated.” He concluded, “His energy is unmatched, his imagination is fascinating and his collective success is beyond belief. … He is an organizer, journalist, scholar and actor. Hagop is a Good Samaritan. He wishes to help everybody, regardless whether those individuals deserve it or not.”

He praised the honoree for giving of his time, ability and resources in the various communities in which he has lived, including Beirut, Amman, Boston and New York. Gundjian referred to the “exceptional role of the ADL in our community,” adding that the party helped keep “the Mother See. It was the ADL, that thanks to the smart leaders and its influential press, tied Armenian and Armenians to Holy Echmiadzin.” He called Vartivarian an “exceptional person” and “one of the leading activists in our press.”

Dr. Haroutune Arzoumanian of the TCA Central Board also offered comments praising him.

The event marked the debut of Ambassador Mnatsakanian in the community. He offered, “I did not know Mr. Vartivarian, but I had heard so much about him that when I met him, I felt I knew him. I want to thank you and your colleagues. You have done so much for us and my colleagues. The way you contribute to Armenia is very special.”

Playwright and freelance writer (and former staff writer for this newspaper) Taleen Babayan then read a message from her grandfather, veteran ADL member Yervant Babayan. She then

added her own comments, praising Vartivarian’s patriotism and thanking him for supporting cultural endeavors, including giving free rehearsal space to the troupe that performed her play,

“Pesad Oor Eh (Where Is Your Groom)?” at the Tekeyan Center in New Jersey.

The event was not just confined to ADL members. Friend and fellow culture lover, Armenian Revolutionary Federation (ARF) and Hamazkayin Central Executive Board member Dr. Hrant Markarian delivered an impassioned tribute to Vartivarian. “Hagop is a khalis [pure] Ramgavar and I am khalis ARF. But we are in a secret Armenian culture club. He has never laid down his weapon in the fight to preserve Armenian culture,” he said. He received thunderous applause from the audience.

Fellow ARF member, Antranik Kasparian, of the ARF Central Committee of Eastern US, had sent a letter on the occasion, in which he said, “Allow me to join the hundreds, from all walks of Armenian life, who are gathered today in recognition of your service, devotion, and accomplishments. There are few in our community who possess your gifts — as journalist, organizer, literary critic, staunch patriot and partisan; and even fewer who devote these gifts so willingly in the service of our nation and its cause. “As is well-known in our community, you and I come from ‘across the aisle’ to one another: You of staunch liberal, Ramgavar background, I of equally staunch Dashnaktsakan background. In the past, we have often focused on those issues that separated or divided us.

This was perhaps necessary at times — especially during the Soviet era, when ideological divisions continued to affect the functioning of our diasporan communities. But today, more and more, we are bound by those issues that unite us, that bring us together in a spirit of collaboration. It is this spirit that has blossomed between our different groups, and I look forward to working ever more closely with you and your colleagues as we seek justice on the momentous occasion of the 100th anniversary of the Armenian Genocide. “Today’s tribute is both timely and richly deserved, sireli Hagop. I join my fellow Dashnaktsakans in extending our warmest congratulations and best wishes, even though I must extend them from afar.”

The honoree himself spoke with visible emotion, thanking his friends and family, as well as expressing his gratitude to the president of Armenia and Catholicos Karekin II for the honors.

Welcoming Armenia’s new ambassador to the UN, he spoke about the ADL’s abiding support for Armenia, regardless of “the color of its flag. … We are all here to help Armenia.We have always loved our Armenia and want to strengthen ties between Armenia and the diaspora.”

He spoke about the importance of the Armenian community and clubs for serving the youth. He recalled how clubs bring the youth together and save the Armenian culture. Referring to his own life, he said that he had lost his mother when he was 16 and his brother 12 and that his involvement in various Armenian clubs provided a home to them. Vartivarian thanked many of the sponsors and donors, and reserved his deep thanks for Barsamian.

Barsamian, when he spoke, quoted the poet Vahan Tekeyan, who had praised the Armenian Church as the center of the Armenian life. “The first half of this century was a dark time for our people. Thanks to people like Hagop, we have an exceptional younger generation now,” he said. He then offered Vartivarian the encyclical from the Catholicos.

In a surprise, he called Nora Azadian, the wife of Edmond Azadian and the recently retired chair of the Detroit Tekeyan Chapter, to the podium and asked her to recite a poem by Tekeyan. She did, with emotion, thrilling the audience. He then presented to her, as a descendent of ADL founder Mihran Damadian and a disciple of Vahan Tekeyan, a plaque honoring her for her achievements as an artist, actress and educator, on behalf of the Tekeyan Central Board.

The banquet benefactors were Edward and Carmen Gulbenkian and the patrons were Henri Dimidjian and Nazar and Artemis Nazarian. Every attendee received a 120-page program book created by the tribute committee, featuring letters, reminiscences and photos.