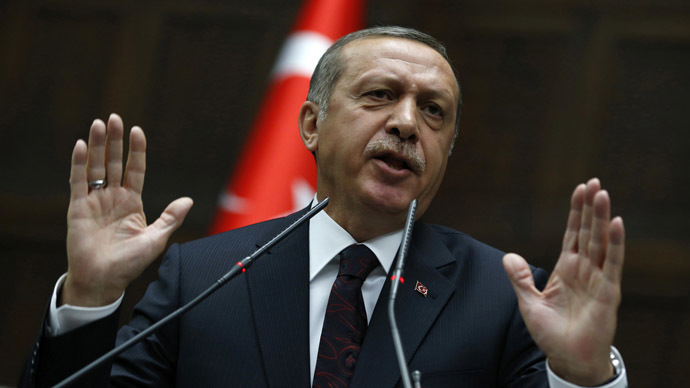 Over the years, official Turkey has invented a unique denialist glossary to convert black into white and falsehood into truth. Armenians and the world witnessed the most recent exhibition of Turkey’s convoluted verbiage when Prime Minister Recep Tayyip Erdogan took to the podium recently and expressed his ‘condolences’ to Armenians. Let’s parse what Erdogan said and what he meant:

a. The “events” of 1915
Events? What’s the “event” that took place in 1915?  Euphemism is an accepted figure of speech, but to call genocide an event makes a mockery of history, truth and the language.

“Event” is when Erdogan attend a ribbon-cutting ceremony of a shopping plaza in Gezi Park.

b.“…conveying our condolences…”
If you are conveying your condolences (?), dear ‘inheritor’, as one of the prime representatives of your nation, you’re a bit late in the day for such a gesture, especially after 99 years…

c. “…the 24th of April carries a particular significance for our Armenian citizens and for all Armenians….and provides a valuable opportunity to share opinions freely….”
Wow. I was shocked, Mr. Erdogan. Can you please say why is it of “significance” to Turkey? Was there a natural calamity in Turkey on that day? Was the arrest of 250 Armenian leaders in Istanbul the significant event you’re referring to? Pray tell. When was this “opportunity” memorized freely…regardless whether shared by you or not?

d. “It is indisputable that the last years of Ottoman Empire were difficult period, full of suffering for Turks, Armenians, and Arabs…regardless of their religion or ethnic origin…”
I do agree on the global suffering which we call WWI. However, why should you generalize and never compare levels of these sufferings among nations? You wished to be next to imperial Germany in those days and entered the war on the German side hoping to regain the liberated Balkan lands which you had oppressed for centuries. You were never forced by any country to commit genocide against the Armenians. You went at it deliberately.

e. “…humanity to acknowledge that Armenians remember the suffering experienced in that period, just like every other citizen of the Ottoman Empire…”
Did you ever, Mr. Politician, advise your Turkish human beings to remember the massacres or at least acknowledge them?
As Turks, did you first confess committing genocide before talking about remembrance?
Are you trying to equate the so-called ‘internal sufferings’ of the Ottoman Empire to the sufferings you inflicted upon the Armenian nation–whether by the empire or the republic?
Where were you and Turkey’s population, throughout the past 99 years? Why only now you you’ve thought of using “diplomacy” in your so-called ‘humanitarian tendencies’?

f. “Millions of people of all religions and ethnicities lost their lives in the WWI…”
Correct. Many states and nations lost a vast number of their citizens during WWI, but the losses occurred because of conflict, state vs. stage aggression. In this instance, it was a case where the state (Ottoman Empire) decided to eliminate its Armenian, Assyrian, and Greek citizens. These three nations were “targeted and were predetermined to hatred”.  Indeed, you cannot ‘design’ a reverse claim…A Genocide can never be replaced by an academic course or study as you suggest.

g. “Turkish, Armenian and international historians would play a significant role in shedding light on the events of 1915 and an accurate understanding of history…”
No ‘shedding light’, Mr. Erdogan. You already turned off the lights in 1915 while we are trying hard to let you reconnect the ‘human electricity’ to let people see the truth.
And how dare you announce that ‘Turkey has opened their archives to all researchers re the 1915 events…’ ?
Whose archives? Yours? Had you not ‘cleansed’ the archives, per your needs, you wouldn’t have announced that your archives are open.

I. “Compassion and respect to all Ottoman citizens…who lost their lives…”
Please, Mr. Entrepreneur. Your Turkish citizens were never massacred, Sir. They died during the war.

Finally, Mr. Erdogan, please note that fake ‘condolences’ are never accepted. No murderer who approaches his victim with such a ‘gesture’ is taken seriously, especially when the victim was long ago targeted and his elimination had been for a long time on the agenda of both Ottoman and Republican Turkey….

*Hovik Nersissian, a political studies graduate from the American University of Beirut (1980), holds a senior administrative position at a company in Saudi Arabia. He is also a globetrotter and freelance journalist contributing to Middle East Arabic and English media. Mr. Nersissian has filed the below critique of Prime Minister Erdogan’s April 23 message to Armenians…. It delineates the buzz expressions, the code words and phrases that the Turkish prime minister used in his statement.