ARMENIA MAY FACE WATER SHORTAGE IF NO MEASURES TAKEN – EXPERT 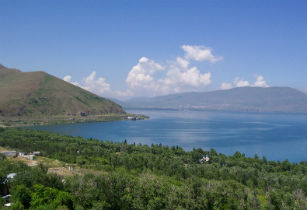 With the average air temperature being above normal levels in Armenia, the country may soon face a shortage of water supply in case of no appropriate measures are taken, warns a specialist.

“The average annual temperature in Armenia has increased by about one degree [Celsius] compared to what we had 20 years ago, while the precipitations have decreased in number,” Aram Gabrielian, a national coordinator for the UN Framework Convention on Climate Change, told Tert.am, citing official data.

He said a failure to undertake special steps may lead to an estimated increase in  temperature by 20C in 203C and a about 30C in 2070, with further 40C-50C increase threatening the country in 2100.

Gabrielian said he expects the worst-case scenario to make Armenia’s climate similar to that of the Iranian plateau.

“The Armenian highlands, whose north-eastern part covers the Republic of Armenia, is on average 600m-800m above the Middle Asian and Iranian mountain plateaus. The recorded temperature difference is five degrees [Celsius]. So if we face a temperature inrease by up to five percent – which is the worst-case scenario – we’ll have climate conditions similar to those in the Iranian mountain plateau,” he explained.

The specialist added that he already sees the water shortage problem in the country, with the rising temperature contributing to a decrease in the number of precipitations by reducing the river flow.

“We have, on the one hand, less precipitations and on the other hand, evaporating ones caused by increasing temperatures of water. So there is a double effect on the river flow. At the same time, the demand for water increases due to the drying climate. So we have an increasing demand with a decreasing supply of water,” he noted.

He said the two factors contribute to over 20%-30% shortage in some areas. “So the demand for water will be observed several mountainous areas with arid-zone agriculture, and be even higher in those areas where water is in demand today, the Ararat valley, for example.

He said further that the shortage will also affect the water balance of Lake Sevan, causing more evaporation from its surface. “The more we get adapted to the climate conditions, saving water resources, the better,” he added.

Gabrielian pointed out to possible technological and organizational solutions, noting that a corresponding action plan is now under preparation to be submitted to the Government next year.

“This, of course, bears a global character, but in order to save water [resources] environmentalists have to step up efforts instead of arguing with the Government,” he added.

But Gabreilian didn’t agree that the current shortage in dams is due only to climate changes. “That’s bears, of course, a certain relationship with that, but if they aren’t filled with the necessary [quantity of water], it is no longer due to weather. And even if it is, it is necessary to take measures to save water in order to eliminate the losses.”

In conclusion, he proposed two possible solutions: reducing the greenhouse emissions and getting adjusted to the changing climate.

Speaking to Tert.am, Mher Mkrtumian, the head of the Territorial Administration Ministry’s State Committee of Water Resources, dwelled on the situation in the dams. “The dam in Akhuryan [Shirak region] contained 403 cubic meters of water last year, but the [quantity] was 193 cubic meters in the same period of this year. In river Arax, we had 23 m/sec drinking water last year against the 10m/sec this year,” the official said, pointing out to a double decrease.

He further elaborated on the causes, attributing the shortage to weather conditions and accumulated waters in the upper streams. “We know where Arax River comes from, so we cannot make any intervention,” he said, noting that the river’s resources are used on Turkey’s territory as well.

Turkey, which now exploits the second dam on Arax, is going to complete the construction of the third this year. The fourth dam, which will be in Karakurt, will have a capacity of 1 million cubic meters. The four dams together are expected to accumulate an estimated 1,380 cubic million of waters. It is noteworthy that the estimated annual supply of Arax is 2,500 million cubic meters.

The official agreed that the Government is facing a serious strategic challenge, but said they are taking the necessary steps. Asked why the authorities are seeking only temporary solutions (such as releasing large quantities of water from an Artesian basin and exploiting 120 water wells), Mkrtumian replied that those were forced measures aimed at organizing the region’s irrigation supply.

He said four dams are under construction in Armenia today, adding they expect to complete the activities in five years’ time. “There are already projects regarding certain dams, and documents have been drawn up,” he added.