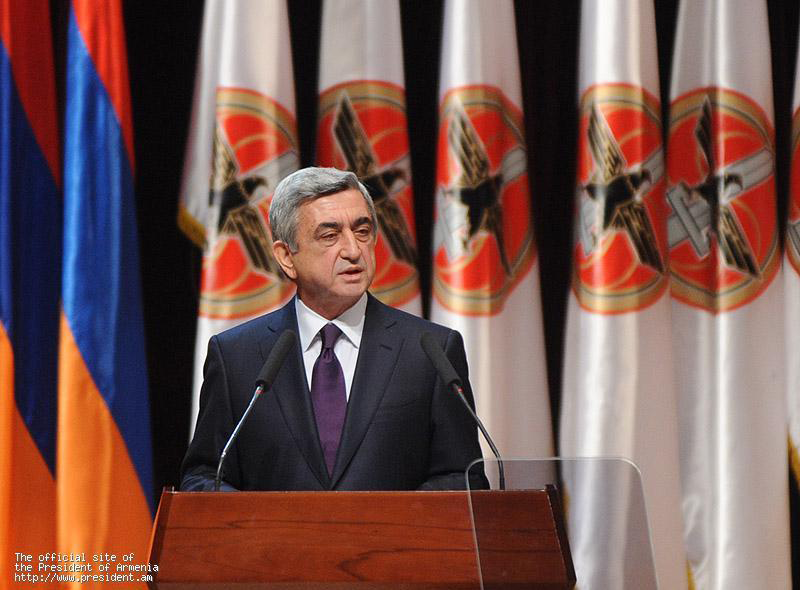 Buenos Aires-Argentina.- President Serge Sargisyan will give an official visit to Argentina and Uruguay, to strengthen the traditional relationship between Armenia and the the Latin countries .

Mr. Sargisyan will be received by the President of Argentina Dr. Cristina Fernández Kirchner on Monday, July 7 at the presidential palace. President will meet also with the presidents of the Chamber of Deputies and Senators of the National Congresss and then pay tribute to the monument of the founder of the Homeland, Don Jose de San Martin and place a wreath. The Armenian Community will welcome the president with a cultural event on Monday night at The National Theater, where President will be the only speaker. There will be a program suitable to the visit, specially prepared by the joint Folkloric dancers, singers and choirs of our community.

On Tuesday July 8 morning, the president will lead the community during the ceremony of blessing the cornerstone of the Armenian Genocide Museum, located at the corner of Gurruchaga and Jufré streets. From there he will walk to Armenia street and head to to the Cathedral St. Gregory the Illuminator, where the clergy will perform a liturgical ceremony, presided the Primate of the Apostolic Church of Armenia to Argentina and Chile, Archbishop Kissag Mouradian.

Outside the church, the president then will pay tribute to Heroes of Karabagh and the martyrs of the Armenian Genocide, in the patio adjoining the church. .

President then will visit the center of the Cultural Association Armenia and Armenian General Benevolent Union and Marie Manoogian Educational Institute where a cultural hall will be inaugurated officially.

Tribute to the heroic battle of Sardarabad

At the end of these activities, president Serge Sargisyan and his party will head to the headquarters of the Armenian Democratic Liberal party and Tekeyan Cultural Association, to honor the memory of those who fought heroic battles of Sardarabad, Gharakilisé and Bash Abarán, makers of the first Republic Armenia in 1918, with placement a wreath at the monument located in front of our headquarters. Monument of Sardarabad in front of Tekeyan cultural Association

After this ceremony, the president and his entourage will be heading to the plaza at the intersection of Armenia, Costa Rica, Nicaragua to Malabia streets to unveil a plaque with the new denomination “Immigrans of Armenia” provided by the city of Buenos Aires.

In the afternoon, the president will depart to Montevideo, to begin his official visit to Uruguay.

We invites the entire community to participant in this historic days of the presidential visit in Buenos Aires. Our massive presence in each one of the acts is the best testimony of our activity and effectiveness of our institutions in Buenos Aires.