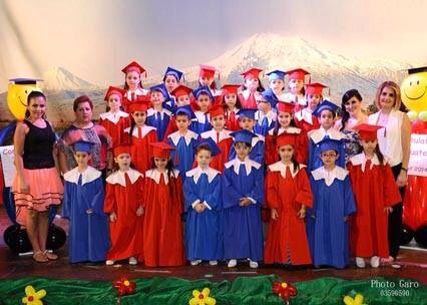 The ceremony started with the Lebanese and the Armenian anthems, followed by the school’s hymn.

After the hymn, the graduates of Harboyan School’s Kindergarten entered the hall, and KG2 students recited the opening speech of the ceremony presenting to the audience the program of the event, soon after which the 27 graduates of KG2 happily got their diplomas. Following this, kindergartners sang, danced, acted and performed on stage putting a smile on the faces of their parents, teachers, loved ones, and the audience. The program of the ceremony was enriched by the speeches and the words of the principal Mrs. Rita Boyadjian and the Patriarchal surrogate of the Lebanese Catholic Diocese Most Reverend Father Kapriel Mouradian.

In her word, the principal mentioned that such an event wouldn’t succeed without the co-operational work of the teachers, administration, parents, students, and all those who had a responsible role in making this event a success. She thanked everyone’s hard work and determination.

The ceremony reached to its end and the audience were invited to the open playground where a reception was prepared to honor them.  During the reception Mrs. Sonig Pamboukian performed couple of songs with her beautiful voice. Her performance reached its peak when she, on the occasion of Fathers Day, sang a special song dedicated to all the fathers present in the audience who in their turn danced with their children.

Congratulations to all those little ones who graduated, they are our hope of the future!