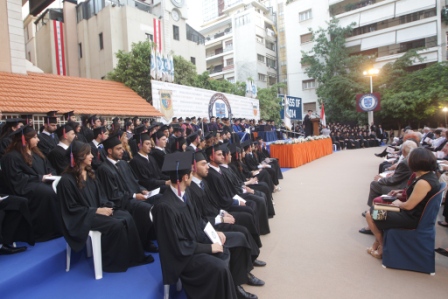 On Friday, June 27, 2014, 139 students proudly earned their undergraduate and graduate degrees, at Haigazian University’s 54th commencement exercises, amidst an atmosphere of cheer and applaud, sometimes mixed with moments of high emotion, thus marking the end of another successful academic year.

MP Hagop Pakradouni represented the Speaker of the Parliament, H.E. Mr. Nabih Berry, whereas the President of the Council of Ministers, H.E. Mr. Tammam Salam was represented by the Minister of Information, Mr. Ramzi Jreige. Among the attendees were MPs Walid Joumblat and his spouse Noura, Jean Oghasabian, and Bassem Shabb, also the President of the Supreme Council of the Evangelical Community in Syria and Lebanon, Rev. Selim Sahyouni, and the Prelate of the Armenian Apostolic Church Bishop Shahe Panossian. The following personalities had sent their representatives: General Michel Aoun, the Commander of the Army, the Heads of the Internal and General Security Forces, and the Armenian Ambassador. The one thousand two hundred attendees included community leaders, representatives of educational institutions, members of the Board of Trustees, parents, relatives and friends.

In his trilingual speech (Arabic, Armenian and English), University President, Rev. Dr. Paul Haidostian addressed the class of 2014, focusing his word on the concept of “today’s educated person”. “Being educated means to capture and process the larger picture on the one hand, but at the same time it means being captured with the deeper picture of life. It is science and faith, mind and heart, rest and work, all together,” Haidostian stated.

Among the numerous requirements to be fulfilled by an educated person, Haidostian pinpointed on the basic ones, noting that the educated person is the one who develops knowledge of the wider world, who thinks critically, who communicates maturely, who constructs, builds, synthesizes and reconciles, who thinks, behaves, works and speaks while being open for improvement.

Haidostian also elaborated on the notion of University heritage, explaining that higher education institutions’ success is not measured by age, years of service or number of students, but it deeply relies on the value of each and every graduate; “Haigazian takes pride in its graduates dispersed all over the world and Lebanon serving their respective countries and communities, thus achieving the University’s motto: truth, freedom and service,” Haidostian concluded.

In his congratulatory remarks, the President of the Union of the Armenian Evangelical Churches in the Near East, Rev. Megrdich Karageozian focused on three aspects of celebration. At the threshold of Haigazian’s 60th Anniversary, Karageuzian considered this graduation a celebration of achievements, possibilities and renewal of vision. He considered that graduates should be proud of their accomplishment in getting a good education without compromises on quality, in order to serve communities with leadership and dedication. On “new possibilities”, he reiterated the fact that the graduates, with their “enthusiasm and positive attitude, they can open new pathways and highways of innovation, creativity, improvement and sustainability”. On getting a new vision of oneself and of the world, Karageuzian concluded that “better quality, better circumstance, better reality can be attained when you think of changing the set of possibilities in and around you”.

Valedictorian Lori Agopian, a candidate for a Bachelor degree in Business Administration, hailed Haigazian University for its diverse student body and the virtue of tolerance. “We realize how important tolerance is especially in a diverse community. But in here, we learned how to master diversity, how to accept others regardless of their differences, how to look beyond what can be seen and to realize that we all are one, serving for one purpose and institution”, Agopian noted. For her part, Enas Hasan, a candidate for Bachelor degree in Biology, appreciated the multi-culturism at Haigazian University, as a reflection of the real Lebanese society. She urged her fellow graduates to really live and apply the coexistence and mutual respect learned on campus in real life, thus preserving the national unity of their country, Lebanon.

Finally, upon the benediction offered by Rev. Karageozian, graduates threw their caps high into the air, as colorful balloons flew overhead.