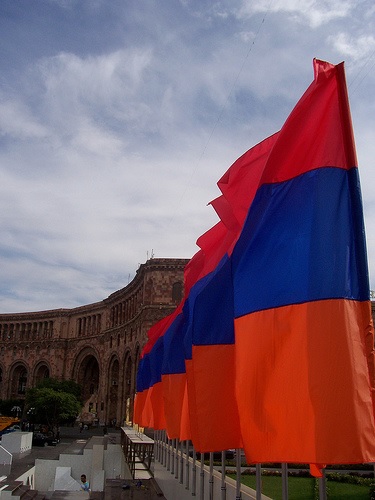 On behalf of the American people, I extend warm congratulations as you celebrate your Independence Day this September 21.

The bonds between the United States and Armenia are strong and lasting. The resilience, hospitality, and creativity of the Armenian people have won you admirers the world over, among them the United States.

Armenia is an important partner with which we share a dynamic and expanding agenda. We are grateful for Armenia’s contributions to peacekeeping operations, including in Lebanon and Kosovo. We also welcome this year’s establishment of the U.S.-Armenia Council on Trade and Investment, which will further strengthen the economic ties between our two countries.

As you celebrate 24 years of independence, I wish you and the people of Armenia the best on this Independence Day and a successful year to come.

I am glad to send you and the entire Armenian people my wishes of happiness, well-being and success as you celebrate the national holiday of the Republic of Armenia.

I am happy that I joined the Armenian people in Yerevan on the occasion of the Armenian Genocide Centennial on April 24.

That exciting ceremony fraught with an atmosphere of wisdom and unity showed Armenia’s willpower to create a brilliant future without burying in oblivion its historical tragedies.

I would like to reassure you that imbued with its special ties with the Armenian people, France will continue its friendship, solidarity and support of Armenia. Particularly, as a Minsk Group Co-Chair, France will continue its consistent mediatory efforts aimed at the resolution of the Nagorno-Karabakh conflict, hoping that the progress made at the Paris summit in October 2014 will contribute to the urgent settlement of the issue.

Please accept, Mr. President, the assurance of my highest consideration.

In a congratulatory address, Putin stressed the successful and comprehensive development of Armenian-Russian relations and hailed the willingness of Armenian partners to further reinforce the mutually beneficial cooperation, both bilaterally and within the framework of the Eurasian Economic Union, the OSCE, and the CIS.

Putin reiterated Russia’s commitment to continue to help Armenia in solving its urgent social-economic issues and voiced his confidence that the framework of allied relations and their constructive cooperation on regional issues would continue to develop.

Meanwhile, President Joachim Gauck of the Federal Republic of Germany sent a the following congratulatory message to President Sarkisian.

On September 21, the Republic of Armenia celebrates the 24th anniversary of its independence. I am sending you and the Armenian people my own and my countrymen’s heartfelt best wishes on the occasion of this special day.

In 2015, a significant year of commemoration for your country, Germany continues to stand beside Armenia as a partner. Since the restoration of Armenia’s independence, the close and trustful relationship between our two countries has experienced rapid and comprehensive development which is vividly illustrated by close bilateral contacts in the areas of culture and science.

In foreign policy affairs Germany supports Armenia’s readiness to continue its political and economic affinity for the European Union within the frame of the Eastern Partnership. By that your country shows that it is possible to simultaneously intensify relations with the European Union, as well as with the Russian Federation and with its the Eurasian partners. My heart wishes for the urgent and peaceful resolution of the Nagorno-Karabakh conflict, as well as for mutual understanding between Armenia and Turkey. In both cases Germany will continue its efforts to support dialogue.

I wish well-being and health to you, and a bright future filled with peace, freedom and prosperity to the Armenian people.

I am pleased to extend my best wishes to the Armenian community in Canada and around the world celebrating the 24th anniversary of the Republic of Armenia’s independence.

In a referendum held on September 21, 1991, Armenians voted in favour of full independence from the Soviet Union. Canada was among the first Western nations to recognize Armenia as an independent state.

Since that time, Canada and Armenia have enjoyed strong bilateral relations and strong people-to-people ties, supported by Canada’s Armenian community, which has contributed significantly to the economic, cultural and social fabric of our great nation.

In recognition of this, we were proud to announce last week that a re-elected Conservative government will establish a new Trade and Consular office in Armenia.

Moreover, this past April, the Honourable Chris Alexander travelled to Yerevan, Armenia to participate in events commemorating the Armenian Genocide Centennial on behalf of our Conservative government, which coincided with our government’s initiative to designate April as ‘Genocide Remembrance, Condemnation and Prevention Month.’

Once again, I wish all Armenian citizens and people around the world of Armenian heritage a happy Independence Day.