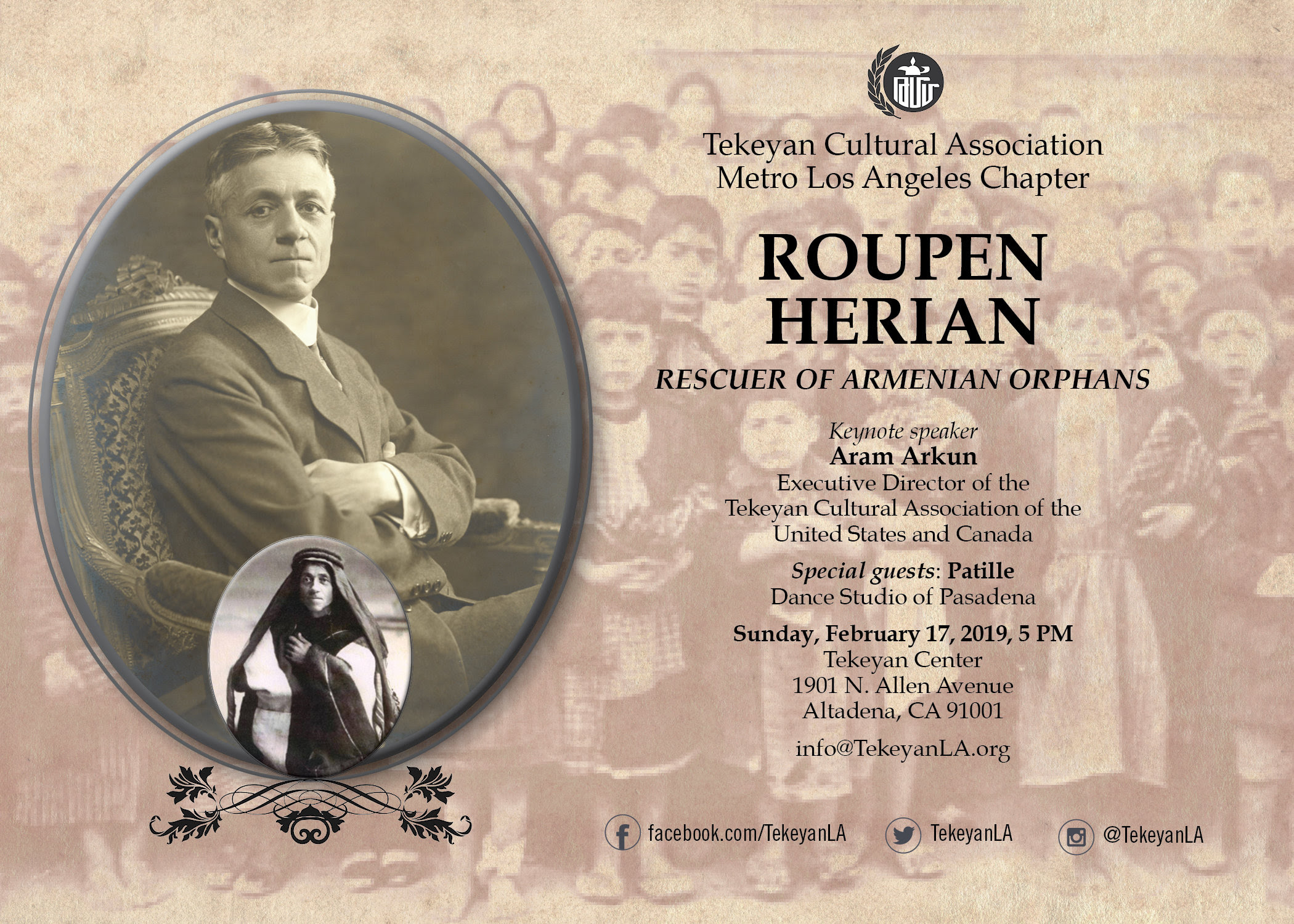 ALTADENA, CA – The Tekeyan Cultural Association Metro Los Angeles Chapter will host a bilingual program titled “Roupen Herian: Rescuer of Armenian Orphans” on Sunday, February 17, 2019 at 5 p.m. at the Tekeyan Center in Altadena. Boston-based scholar Aram Arkun, Executive Director of the Tekeyan Cultural Association of the United States and Canada and Assistant Editor of the Armenian Mirror-Spectator, will serve as the keynote speaker and, with the help of illustrations, present the fascinating life of Roupen Herian, who was entrusted with the herculean task of locating kidnapped Armenian women and children.

Herian was born in Tokat sometime between 1868 and 1872, but after graduating the local Armenian school, left to engage in commerce in Constantinople. He left for the United States in May 1895, possibly due to the oppressions of Sultan Abdul Hamid II and his regime.

Herian immigrated to Boston and later moved to New York City. He became a successful businessman, while continuing to be deeply involved in Armenian political activities. In 1916 he carried out a secret war mission for the British government.

Herian helped arrange the transportation of the 1,200 Armenian-Americans who joined the Armenian Legion, which successfully defeated the Turkish and German forces at the Battle of Arara in Palestine in September 1918, and himself later enrolled as a legionnaire.

Herian served as the director of an infirmary in Egypt for the legionnaires, and participated in an abortive expedition to help the besieged city of Hadjin. He also played a role in the defense of the Cilician city of Dört Yol (Chork-Marzban).

As representative of the Armenian General Benevolent Union (AGBU), Egyptian Armenian Relief, and [Armenian] United Orphan Care, with additional financial support from the Armenian Church, the Armenian Democratic Party (predecessor of the Armenian Democratic Liberal Party), various other Armenian relief organizations, and, most strikingly, many individual Armenians who themselves barely had enough money to live after the Genocide, Herian tried to rescue kidnapped Armenian woman and children from Bedouins, Turks, Kurds and their harems. Using his adept language skills, Herian disguised himself as needed as an American missionary, British official or Bedouin, primarily in the Aleppo, Der Zor and Mosul regions, to carry out his mission. Despite threats of death and robbery and facing great resistance from those who did not want to easily relinquish Armenian women and children from their hold, Herian remained valiant. Herian used persuasion, money and sometimes threats to rescue Armenian women and children from their captors.

He was a moving and effective speaker who participated in fundraising activities in the United States, France, the Ottoman Empire and Egypt with the intent to rescue more women and orphans. His untimely death in Cairo, Egypt on July 7, 1921 prevented him from fulfilling those plans.

Keynote speaker Arkun is a graduate of Princeton University and has a master’s degree in international relations from the University of Pennsylvania and a C. Phil. degree in Armenian history from the University of California Los Angeles.  He has been editor-in-chief of the AGBU Ararat quarterly, director of the Krikor and Clara Zohrab Information Center of the Diocese of the Armenian Church (Eastern) and adjunct assistant professor at New York University, among other past posts. He has written a number of articles on Cilician Armenians in the modern period.

Also participating in the program are the dancers of the Patille Dance Studio of Pasadena, under the direction of Patille and Cynthia Albarian.

Roupen Herian made many personal sacrifices to serve the Armenian people, in part by means of the Armenian Legion, Armenian Democratic Party and AGBU. Herian remains a great patriot and hero of the Armenian nation, whose bravery, determination and sacrifice led to the rescue of countless Armenian orphans and women.