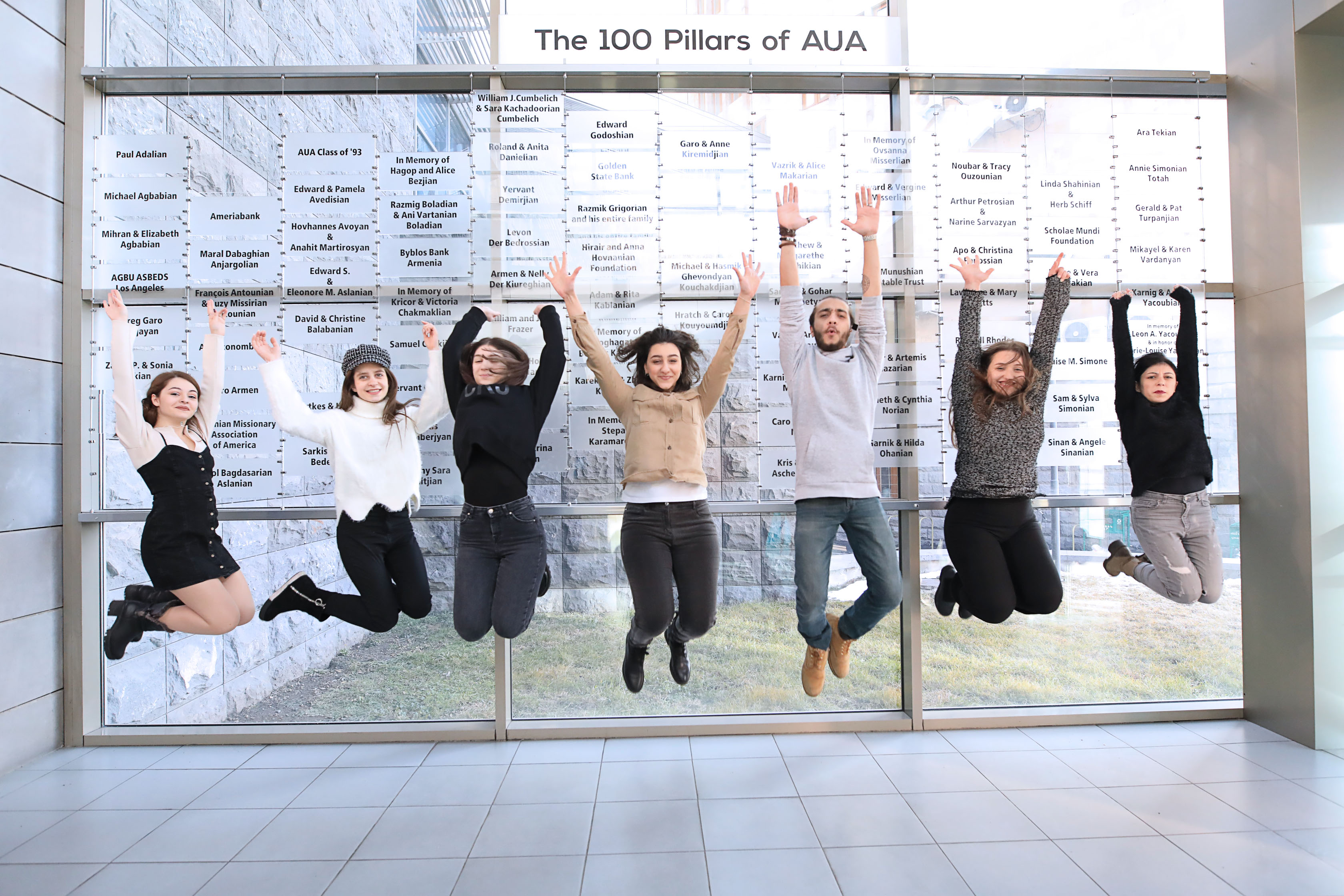 A glass wall shines under the Yerevan sun in the lobby of the Paramaz Avedisian Building, one of the newest and most striking additions to the American University of Armenia’s campus. As students walk to and from classes past this honorary wall everyday in an environment abuzz with academic activity, they recognize the commitment of the 100 individuals and organizations from around the world who have dedicated themselves as donors to the only U.S.-accredited, independent institution of higher learning in the Caucasus.

The names of the 100 Pillars of AUA, a milestone campaign that recently came to a successful close, were etched one by one on the glass wall dedicated to these collective group of visionaries who remain actively engaged with AUA and its students. These donors possess a strong belief that they are investing in the future of Armenia through every single one of the 2,000 students at the University and the many more to come with their own hopes and dreams, who will enter through AUA’s doors, marking the beginning of their journey toward impacting their home country.

It was only three short years ago when the decision was made by the senior leadership of AUA to gather a foundation of supporters, aptly named “pillars,” who would buttress the financial future of AUA in order to allow current and future generations to benefit from the academic institution with the goal of one day contributing towards the development of the homeland.

President and co-founder of AUA, Dr. Armen Der Kiureghian, was present at this meeting and understood the importance of identifying a core group of University supporters.

“We thought they would literally be Pillars in the sense that they would care deeply for the University and shoulder some of the urgent financial needs,” said Dr. Der Kiureghian. He noted that the aim was to have Pillars’ donations be unrestricted so the University could direct the funds to where it was most needed. Ultimately, the contributions would ease the immediate financial needs of AUA and focus more on long-term goals, such as bolstering the endowment, establishing competitive programming, hiring renowned faculty, enriching the library resources, promoting continued education for staff on campus, and building modern and technologically advanced facilities for the University’s community and the general public.

The plan worked – AUA’s endowment more than tripled during this period ensuring the University’s financial health, without compromising its high-quality of education. In fact, the school thrived under the guidance of the 100 Pillars of AUA campaign. Through the unrestricted funds scholarships increased – allowing nearly half of AUA’s students to be rewarded some level of financial aid – as did support for faculty and staff development. It also fostered the growth of practical and relevant programs, including the launching of three new degrees: MS Strategic Management, BS in Engineering Science and BS in Data Science.

“The Pillars’ association with AUA enhances the momentum and integrity of the institution and gives us a stronger sense of responsibility to serve the homeland,” said Dr. Der Kiureghian.

Serving the homeland is the mission of AUA’s founders and the University’s donors. As the leading academic institution in Armenia, AUA is always at the helm of progress and advancement. Its leaders also understand the significance of educating not only those in the nation’s capital, but throughout the country, particularly in the villages. The University has seen an influx of qualified and talented female students from the rural areas, many of whom are studying computer science on scholarships, like Alisa Martirosyan, a freshman majoring in Computer Science. As a child, Alisa often played with a Rubik’s cube and her interest in the combination puzzle could have easily waned as she followed a routine lifestyle in her hometown. She was emboldened, however, when she was accepted into AUA and received aid to complete her college education, committing herself to becoming a biomedical engineer, which she calls a “powerful” program. At AUA she has already acquired “a lot of knowledge as the school teaches us to think and solve problems not only in the field but in life.”

“The experience that AUA provided me with enabled me to adapt to any condition and environment,” said Harutyunyan, a freshman. “AUA contributed greatly to the development of my professional proficiency and I plan to share that in a way that will benefit my society.”

This is exactly why donors see AUA as the gateway to strengthening Armenia through its people. The 100 Pillars, who come from around the globe with diverse backgrounds, all understand that the academic institution is the most qualified to lead the next generation towards success that will reverberate throughout all regions of the country through education and knowledge.

“We need to empower the young men and women in the country to receive the best education possible so that they can progress and lead the country in the right direction,” said Pillar Isabelle Dokouzian. “I believe that AUA does a remarkable job in preparing the future leaders of Armenia.”

Linda Kay Abdulian, the President and CEO of The National Raisin Company, another one of AUA’s Pillars, based in Fowler, California, acknowledges that “an investment in education pays the best dividends.”

Providing a high caliber education has always been a priority for AUA and that is achieved not only through motivated students, but through leading professors in their respective fields who are opening students up to a larger landscape, particularly in the technology field. Pillar Dr. Michael Kouchakdjian, who also serves as a Professor of Business and Management at AUA, spearheads the Entrepreneurship and Product Innovation Center (EPIC), a cutting-edge facility on AUA’s campus which serves as an incubator for students who are developing their start-up ventures. Since its founding three years ago, many of EPIC’s students have become champions in competitions around the world. In an atmosphere of entrepreneurship and collaboration, students have the ability to tap into their potential in the first-class facilities and workspaces, programs and events.

Los Angeles-based Pillar Sara Chitjian saw the potential of EPIC and its novel approach, and generously established an endowment to secure the operations of the Center.

“I feel Armenians have the ability to create something very unique because they have that type of brain,” said Chitjian. “When someone asks who made a great invention, I want the response to be that an Armenian made it.”

Over the years, Dr. Kouchakdjian has seen the evolution of AUA and has been a participant in its growth since the time of its founding. Along with his wife Hasmik, as Pillars, they have both upheld the University and its student body.

“I witness how the funds raised by the Pillars program expands the reach and capacity of the faculty to engage and address the challenges of Armenia through research and policy recommendations,” said Dr. Kouchakdjian. “AUA has perhaps the greatest concentration of individuals and expertise in Armenia for providing guidance in the design and implementation of forthcoming policy, reforms, and opportunities in the new Armenia.”

This “New Armenia” materialized in April 2018, when thousands of citizens took to the streets during the Velvet Revolution to call for a new and more transparent government that would have the best interests of its citizens at heart. Many of the demonstrators were themselves AUA students and alumni, ready to have their voices heard and become a part of the direly needed change in their birthplace. It was this desire to have a hand in shaping Armenia’s future that AUA’s students stepped up – including Sergey Sarukhanyan, who is a recipient of the Edward and Eleonore Aslanian Endowed Scholarship, who remarks that his scholarship gift played a “significant role” in his life.

“My goal is to serve the communities in which we practice and live,” said Sarukhanyan. “The skills and knowledge gained at AUA will help me represent people who cannot afford legal representation as I plan to become a fully-fledged member of the society and the Armenian community.”

Sarukhanyan will be following in the footsteps of accomplished alumni before him, a number of whom are serving in the post-Velvet Revolution government, including Secretary of the Armenian Security Council, Armen Grigoryan (PSIA ‘11), Deputy Minister of Education and Science Arevik Anapiosyan (PSIA ‘08) and Deputy Governor of the Syunik District Hermine Hambardzumyan (PSIA ‘03). Four members of the newly elected parliament are AUA graduates.

“AUA professors triggered our critical minds and encouraged reflective thinking, giving us knowledge and skills to finally bring the needed changes to our country,” said Anapiosyan. “I can only envisage that Armenia from now on is on the road towards democracy and I cannot be more proud that we have moved from imitating reforms to actually performing them.”

Though the Diaspora is spread throughout the world, Armenians are deeply rooted in their homeland and understand the importance of creating a bridge and contributing towards an Armenia that every single Armenian will want to return to one day.

“We became Pillars so our children can be proud of their homeland when generations of students graduate from such a prestigious institution,” said Kurken and Armine Alyanakian, who are advocates of AUA’s Western style, multilingual education with international standards that will encourage students to think independently. “Every student that graduates from an educational facility with such a philosophy will form the backbone of the nation.”

“The Pillars not only see how great Armenia is, but also witness the strong role of AUA and the results of the University’s mission and work,” said Professor Areshian.

Though the 100 Pillars of AUA campaign has successfully concluded, the work is not yet finished for the students nor the University. Looking forward, AUA will continue to remain communicative with its core group of donors while creating more visionary plans.

“This elite group of donors have remained steadfast Pillars and the University will always depend on their support, engagement and advice in order to uphold AUA’s mission,” said Dr. Der Kiureghian. “Symbolically, the University is supported on their shoulders.”

“Contributions from the 100 Pillars Campaign gives AUA the freedom to pursue its strategic priorities and explore new directions that could be very important for the advancement of the University,” said Dr. Varduhi Petrosyan, Dean of Gerald and Patricia Turpanjian School of Public Health. “And advancement of AUA usually means advancement of its alumni, who strengthen Armenia and make leap development a possibility.”

As AUA continues to grow, the University is preparing for its next chapter and broadening its horizons.

“With the new developments in Armenia, we need new developments at the University,” said Dr. Der Kiureghian. “We have the foundation through our Pillars and now we want to continue to grow and advance.”

“We thank our Pillars for not only helping AUA address its most pressing needs, but also securing promising opportunities without delays,” said Gaiane Khachatrian, AUA Director of Development. “This has been an incredible journey that gave us the opportunity to bring together 100 philanthropists from various parts of the world with diverse backgrounds and interests who all made educating the future leaders of Armenia a priority.”