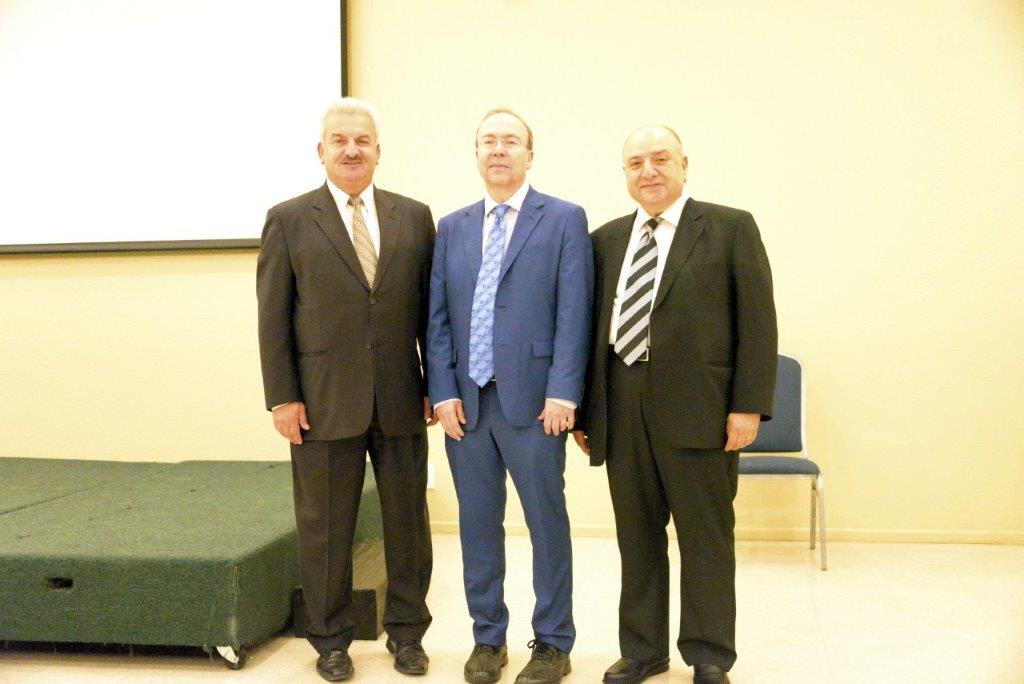 ALTADENA, CA – The Tekeyan Cultural Association Metro Los Angeles Chapter hosted a program titled “Captain Jim Chankalian: Leader of the Armenian-American Volunteer Soldiers” on Sunday, November 18, 2018 at the Tekeyan Center in Altadena. Boston-based scholar Aram Arkun, Executive Director of the Tekeyan Cultural Association of the United States and Canada and Assistant Editor of the Armenian Mirror-Spectator, served as the keynote speaker. Arkun eloquently presented the fascinating life of Captain Jim Chankalian, who was a part of the Armenian Legion that successfully defeated the Turkish and German forces at the Battle of Arara in Palestine in September 1918 and occupied Cilicia, as well as a volunteer fighter under the Russians in Van during World War I. Arkun is the grandson of Armenian Legionnaire Roupen Chakerian of Zeitoun, who fought in Cilicia, as well as served under General Antranig in the Caucasus.

The AGBU-AYA Scouts of the Pasadena-Glendale chapter opened the bilingual program with the flag ceremony dedicated to the 100th anniversary of this heroic victory at the Battle of Arara that opened the way for the allied armies to march up the coast through Syria and reach Cilicia. The 4,000 members of the Armenian Legion (including 1,200 valiant American-Armenian soldiers, with Captain Jim Chankalian as one of their leaders) risked their lives, with many sacrifices, to avenge the Armenian Genocide and create an independent Armenian state.

The master of ceremonies, Aleksan Giragosian, the vice-chairman of the Tekeyan Metro Los Angeles chapter, then introduced Mrs. Kana Hovhannisyan, Second Secretary of the Republic of Armenia’s Consulate General in Los Angeles, who spoke poignantly about Chankalian and the Armenian Legion.

Keynote speaker Aram Arkun meticulously detailed the life of Captain Jim Chankalian, based on family documents and photos, contemporary Armenian press reports, memoirs and articles. After his birth in Dikranagerd in 1879 and arrival in New Jersey, from a very young age Chankalian was a very active and martially-inclined youth. He was encouraged to maintain his Armenian heritage by his older brother and father. Chankalian entered the United States Army during the Spanish-American War and trained in Florida, but the war ended before he actually saw combat duty. Upon return to New Jersey, he took a role of leadership in local Armenian military training clubs prior to World War I.

Chankalian’s military prowess as leader of the Armenian-Americans in the Armenian Legion and his life of sacrifice resonated with the audience. Arkun explained how Chankalian was initially a member of the Reformed Hunchag party and later on became a member of the Armenian Democratic Liberal party (A.D.L). Chankalian took Armenian-American volunteers to the Caucasus in 1915 to help the Russian armies against the Ottoman Turks. He served in Van as a militia leader alongside Armenag Yegarian, meeting General Antranig and other noted fedayi leaders. A few years later he collaborated with General Antranig in a failed attempt to bring independence to Cilicia under Armenian rule.

Arkun explained fascinating details about Chankalian’s service and devotion to the Armenian cause, carried out even at the expense of his own family. Arkun presented a somber letter written by Captain Jim Chankalian explaining why he must leave his sons temporarily in New Jersey to enter military battle overseas to defend the Armenian people. Late in life, Chankalian wrote to the administration of PresidentFranklin D. Roosevelt offering his services during World War II, but was respectfully declined.

Arkun noted numerous instances where Chankalian participated in fundraising efforts for the benefit of Soviet Armenia. He explained details of his service as the first president of the Central Committee of the Armenian General Benevolent Union (AGBU) in the United States (1945-1946). Chankalian also served the Armenian Church in numerous leadership positions, among them as a member of the original committee which led to the building of the Diocesan Center and St. Vartan Cathedral in New York City and as a delegate to the election of a new spiritual head of the Armenian Church at Holy Etchmiadzin in 1945. Arkun noted that the New York Times covered the death of Chankalian, who was buried in Fairview, New Jersey in 1947.

Participating in the program was Dr. Zaven Arslanian, the maternal grandson of Sergeant Caspar Menag of Chnkoosh and Lawrence, Massachusetts of the Armenian Legion. Arslanian spoke of the love and respect he held for his grandfather, Sergeant Caspar Menag, who fought at the Battle of Arara and in Cilicia, and was also a devout member of the Tekeyan Cultural Association and a friend of Chankalian.

Heartfelt remarks were made by Archbishop Vatche Hovsepian, who explained that upon arriving in the United States and becoming the pastor in Union City, New Jersey, he first learned of the reverence held for Captain Jim Chankalian, who had already passed away by that time. He explained the great respect and admiration he personally held for Chankalian and emphasized the tremendous respect the Armenians originally from Dikranagerd who fled to New Jersey had for Chankalian as well.

The master of ceremonies, Aleksan Giragosian, recognized the sons and grandsons of Armenian Legionnaires in attendance. In particular, Hampig Nazerian, the grandson of Hampartsoum Nazerian of Hadjin, who fought at the Battle of Arara and was later buried in front of the monument to the martyrs of the Battle of Arara at Holy Savior Cemetery in Jerusalem, was noted. Giragosian also recognized Hratch Manoukian, who was unable to attend, as the son of Armenian Legionnaire Nazaret Manoukian. Nazaret Manoukian was a military policeman born in Adana and similarly to Chankalian, arrived in the United States at young age, only to return to fight at the Battle of Arara. During his talk, Arkun displayed images of these individuals as well as of Caspar Menag.

The young dancers of the Patille Dance Studio of Pasadena, under the direction of Patille and Cynthia Albarian, performed a number of dances in honor of the Armenian Legion with great energy and grace.

Aram Arkun captured the essence of Captain Jim Chankalian and why he made many personal sacrifices, even to the detriment of his family, in order to serve the Armenian people, by means of the Armenian Legion, ADL, Armenian Church, AGBU and the United States Army. Chankalian’s tombstone in New Jersey rightfully describes his life of sacrifice with the words “Patriot, Humanitarian, Soldier.”