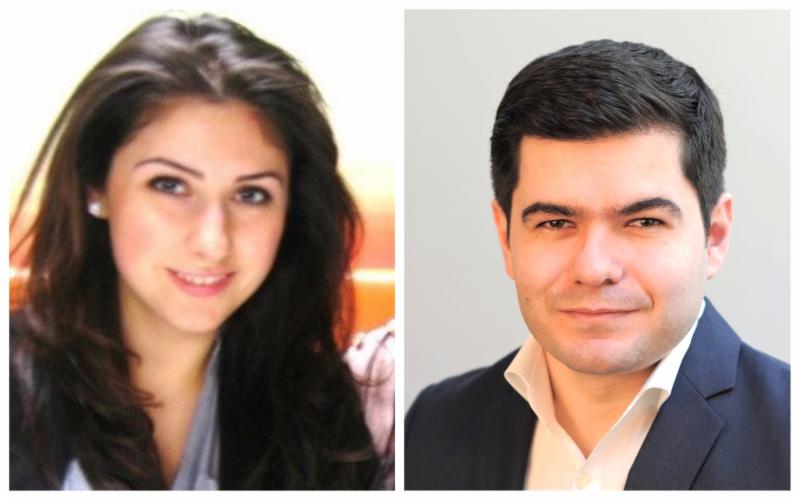 NOR OR, LOS ANGELES. – The Armenian Assembly of America (Assembly) is pleased to announce the additions of more young professionals, Armineh Ghazarian and Narek Sevacheryan, as new State Chairs in Maryland and New York, respectively, who will help promote Assembly initiatives in their communities.

“The Armenian Assembly has always encouraged the next generation across the nation to get more involved in their communities and learn more about Armenian American advocacy efforts, starting with our internship program for college-aged students in Washington, D.C. and reaching out to young professionals to get more involved. We look forward to working with Armineh and Narek to help with our advocacy efforts in their home states,” Assembly Executive Director Bryan Ardouny said.

Armineh Ghazarian earned her Bachelor’s Degree from the University of Maryland, and graduated from Georgetown University School of Medicine with a Master’s Degree of Science in Biotechnology, Bio-business and McDonough School of Business with a Master’s Degree of Science in Finance. She is based in Silver Spring, and works at Georgetown University as the Financial Analyst and Grant Manager at the Lombardi Cancer Center. She is an active member of St. Mary Armenian Apostolic Church, and has served as Chairwoman and Treasurer of the Armenian Church Youth Organization of America, as well as Founder and Chair of the College Career Center at St. Mary.

Narek Sevacheryan is a Financial Advisor with The Bieber Group at Morgan Stanley, providing forward thinking financial strategy to high net worth families, family offices, and international clients in New York City. He previously worked at the Center for Strategic and International Studies (CSIS) in Washington, D.C., where he contributed to publications with leading scholars focusing on foreign policy and national security analyses in Eurasia. While in school, he served as the President of the Armenian Society of Columbia University, where he organized multiple talks and discussions related to Armenia and Artsakh, including a panel featuring Armenian Assembly Co-Chair Van Krikorian on Armenian-American and Russian-Armenian relations in the context of current developments. In 2014, as part of his Luys Scholarship Program, he participated in the “Develop Armenia Together” program where he helped create an economic development plan for Shushi in Artsakh.

“We welcome our new State Chairs, as well as thank the current State Chairs and Committees who have been active in their communities throughout the year. It was especially significant to have so many travel to our nation’s capital and join us for our National Advocacy Conference & Gala,” stated Armenian Assembly Co-Chairs Anthony Barsamian and Van Krikorian. “We look forward to continuing this momentum, and encourage every State Chair to reach out to their local representatives, especially those who are newly elected, and share with them the issues and concerns for the Armenian American community.”

“In addition to our hardworking State Chairs, we would like to extend our congratulations to the Assembly State Chair in South Carolina, Richard Harpootlian, who was sworn into the State Senate last week, representing District 20 of South Carolina. We are inspired by every Armenian American who takes part in the American democratic process and runs for an elected position,” the Co-Chairs added.