Seamstress of Ourfa author to appear at Abril Bookstore 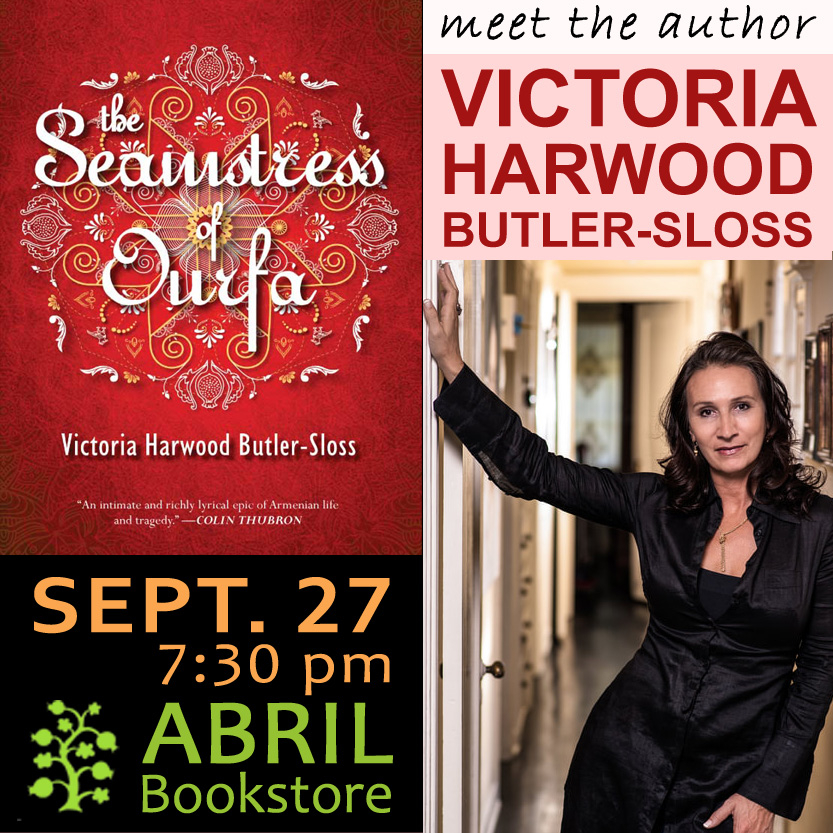 NOR OR, LOS ANGELES – Armenian/English author from Cyprus, VICTORIA HARWOOD BUTLER-SLOSS will present her newly released book, THE SEAMSTRESS OF OURFA on THURSDAY, SEPTEMBER 27, 2018 at 7:30pm at ABRIL BOOKSTORE – 415 E. Broadway, Glendale, CA.  Admission is free.

THE SEAMSTRESS OF OURFA is set in 1895, Ourfa, a thriving, cosmopolitan city in the Ottoman Empire. Khatoun Khouri, a girl of thirteen, meets her future husband, Iskender Agha Boghos. Twice her age, a poet, philosopher and dreamer, he adores her but cannot express it in words. Around them, the Ottoman Empire is crumbling, the world heading towards war and the Armenian minority subjected to increasing repression, culminating in the genocide of 1915. As Iskender retreats into his books and alcohol, losing land, money and business, Khatoun holds their family together by sewing for the wives of the men who persecute them; her creations inciting love, lust and fertility. The family joins the resistance and evades the death marches to the Syrian Desert only to lose everything when exiled by Mustafa Kemal and the birth of the Turkish Republic in 1923. What follows is a tale of love, loss and redemption in the diaspora told by four generations of women, each becoming the guardian angel of the next.

VICTORIA HARWOOD BUTLER-SLOSS is part Armenian, part English and grew up on the island of Cyprus. She began her career as a dancer at the world famous Raymond Revuebar, trained at the Royal Academy of Dramatic Art and spent twenty years as an actress in TV, film and theatre in London.

After getting married she moved to Los Angeles, started a family, continued to work in voiceovers and wrote her first opus, a trilogy beginning in the Ottoman Empire in 1895, following four generations of women until the present day.