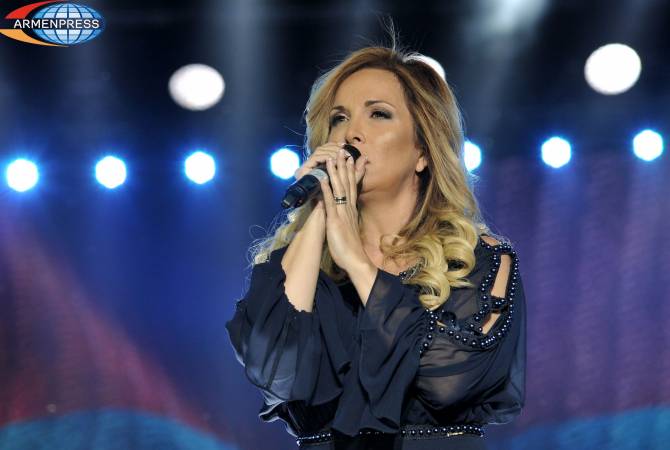 She had a unique love for music since early childhood. Her Armenian mother opposed her girl in becoming a singer, but at the age of 11 the future star took part in her first competition – and won!

At 15, she left school and began singing in clubs and restaurants of France. Her debut CD failed to gain commercial success, but the singer didn’t lose hope and her first failure was followed by multiple successes.

According to international press and critics, the best actress of the role of Esmeralda in Notre-Dame de Paris (musical) is Hélène Ségara.

In an ARMENPRESS exclusive, Hélène Ségara talked about Armenia, her Armenian roots as well as her collaboration with Charles Aznavour and Michel Legrand, the Notre-Dame de Paris musical and other topics.

Hélène Ségara arrived in Yerevan for the Republic Day celebrations on May 28. She performed two songs at the May 28 grand concert in Yerevan’s Republic Square. She sang Charles Aznavour’s  Pour Toi Armenie and the old Armenian Dle Yaman song. I get the same feelings each time I come here. When I came here for the very first time I had the feeling like I’ve been here before. It seemed like the blood of my family had awakened. The grandfather of my mother was born in Mush. He fought under the command of General Andranik, fought for his fatherland. And this makes me emotional each time I come here.

‘My mother didn’t want me to sing’

She was afraid that show-business would be dangerous for a young lady. But I told her that singing is my passion and I have to pursue my passion. My mother went to school with Charles Aznavour’s daughter. She met Charles Aznavour years later. After meeting him my mother told me that she is very proud of my career. We met for the first time when I was making my first steps in my career, I was very shy. Charles needs time to discover people. We didn’t talk much the first time.

Years later we visited Armenia as part of an official delegation. I and Charles were out for dinner together. During the dinner, a singer sang Dle Yaman. When I heard this melody I began to cry. Charles said: “I know, this song makes me cry too”. This is why I included this song in one of my albums, I wanted the French to discover this song. It is also one of the favorite songs of my mother.

When I first came to Armenia with Aznavour, I wrote a song about the story of a family, about the Genocide, it is called Dans Nos Souvenirs. I wrote this song for my daughter. I said that it has the following message: “Doesn’t matter if you haven’t been to Armenia, one day you will come here with me, and you will understand how we have struggled, how we have lived. This is why you are here today.” When I performed this song in Yerevan, I cried. It is hard to sing when you have so many emotions.

Charles Aznavour told me that he discovered Armenia late. The more you stay here the more you discover about your family and roots. In the context of love and peace

I give concerts in different countries of the world. I take the message of love and peace with me. I sang Ave Maria from Notre-Dame de Paris musical on my knees even in Arab countries. Ave Maria is a prayer, a message of love. I don’t understand why people wage war because of faith….

I like Notre-Dame de Paris musical a lot. When I was little, my mother used to call me Chingine, because I wanted to be a Gypsy, I didn’t wanna wear shoes. When I was offered to play Esmeralda, I told myself – God, this is me”. Garou, me and other members of the team had a truly magical chemistry going on. I like the songs of the musical a lot, I want to perform them during the course of my entire life. This is one of my best memories…

Bocelli, Legrand and other artists…

Every time I have a concert somewhere people say: you must sing your song with Andrea Bocelli [Vivo Per Lei duet]. We are still very close. I am lucky to have had the chance to sing with him. He has one of the most beautiful voices.

I’ve collaborated many times with Legrand, we are very close, I sang with him. We have recorded a duet together – La valse des Lilas.

There are so many artists with whom I would want to collaborate. I am very close with Celine Dion, we sang together for a TV show, but we don’t have a recorded duet. She is a very pleasant person. I like Barbra Streisand’s voice. I also like the so-called less popular singers.

One of my favorite bands is Radiohead. I also like the famous System of a Down. ‘I want to protect my daughter’

She sings very well. If she will want to pursue singing, I hope I will be able to protect her. I want her to remain my little girl, and that no one hurts her. A singer’s profession is very hard, it has both good and bad sides.

I am working on many projects now. I am on a global tour, I came to Armenia from Ukraine. In the recent years, I am among the jury of France’s Got Talent, I’ll be among the jury until Christmas. In addition, there are many TV shows and I am preparing a new album.

#CultTalk is a new ARMENPRESS exclusive featuring interviews with both Armenian and foreign artists, singers, actors and other show-business stars.