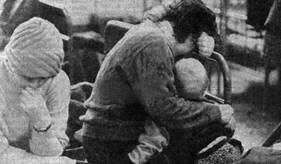 Nazism and racism are the main pillars on which the artificial Azerbaijan state was formed in 1918, which is a Pan-Turkish project.

The current military-political leadership of Azerbaijan, remaining faithful to its style, continues to make Nazi ideology an integral part of domestic and foreign policy. which in different periods had different forms;

– Before Azerbaijan acquired statehood, it manifested itself in opposition to the Muslim population, which formed the identity of the Caucasian Tatars around the idea of “Azerbaijanism”.

-1918-1920 Pogroms of Armenians in Azerbaijan and Artsakh. The attempt was to bring the Armenian element out of the region.

– Soviet period. The manifestation of anti-Armenian policy in the form of demographic, economic, cultural and historical pressure on the population of the NKAR;

– Post-war period. The anti-Armenian policy of Azerbaijan has acquired a programmatic, institutional character.

Armenophobia in Azerbaijan is institutional in nature. It involves both official structures and the media, as well as academia, public opinion leaders and intellectuals. At the official level, Armenophobia is formed as one of the pillars on which the ideological base of the ruling regime is built. Further, the official “first-person messages” are relayed to society through communicators — members of parliament, ministers, and other lower-ranking officials. The media and official propaganda act as a repeater. The next link in the chain of delivering the “message” to the public is public figures and experts who explain the message in a more understandable informal language. And at the last level, society, as an object of propaganda, consumes information. In this scheme, an important role is played by the family, as an institution for the education of citizens. And, as a result, anti-Armenian propaganda also penetrates into educational institutions of preschool, school and university levels.

The policy of Armenօphobia is conducted starting from kindergarten and up to universities.

To counter the genocidal policies of Azerbaijan and anti-Armenian fascism, the following mechanisms must be applied:

observation and collection of facts;

processing and analysis of information;

development of a response strategy;