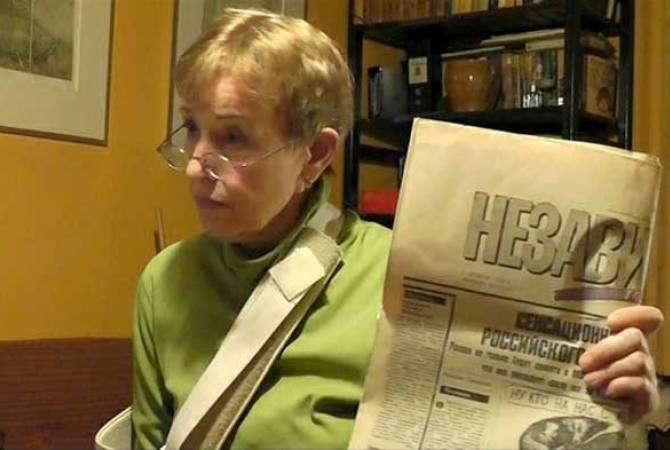 The reporter regrets that she was unable to preserve the recording due to technical reasons.

“There was no internet, there were no computers, but I reaffirm that what I wrote back then are what Ayaz Mutalibov said, I have not added anything. Now he can deny it as he wants, but he said it the way it is printed in “Nezavisimaya Gazeta” newspaper. I have the copy of that newspaper and its available on the net, Ayaz Mutalibov has said it”, Dana Mazalova said in an exclusive interview with ARMENPRESS. Mutalibov gave an interview to Dana Mazalova after 1 month following his resignation.

Mazalova heard about the tragic events of Khojaly from the video recordings of cameraman Chingiz Mustafayev, who had personally made exclusive records. “Chingiz, whom I met in Kislovodsk, told me in his apartment how those people were killed, they were hurting their knees so they couldn’t go. The knees… the most vulnerable place on human’s body. I was scheduled to take an interview from Ayaz Mutalibov the next day. I could not help asking him what I had seen in the records made by Chingiz. Of course, I did not say the name of my friend Chingiz not to harm him. After 2 months Chingiz was killed”, the reporter recalls with grief.

Dana Mazalova told also about another recording of Chingiz Mustafayev. The bodies of the victims of Khojaly events were seen in a video recording done on February 28 in front of the military positions of the “Popular Front” of Azerbaijani troops. According to Muslim traditions, the bodies should have been buried within two days, but Chingiz Mustafayev could record them also on March 2, but this time the bodies were taken to another place and were vandalized. In the video recording of February 28 it could be seen that Azerbaijani soldiers were walking near the bodies.

“I feel very guilty for not taking and copying those recordings. I feel so sorry up till now. I think you understand that my interview with Mutalibov was the result of those video recordings and my conversations with Chingiz”, Mazalova said.

To the remark of the reporter of ARMENPRESS that incumbent president of Azerbaijan Ilham Aliyev used the public platform of Munich Security Conference on February 15 to deny the words of Mutalibov, Mazalova emphasized, “I will put this way. We know that Turkey denies the Armenian Genocide up till now”.

One month after the Khojaly tragedy Azerbaijani president Ayaz Mutalibov was interviewed by Czech reporter Dana Mazalova.
– What would you say about the Khojaly events, after which you resigned? At the time, bodies of people from Khojaly were discovered not far from Aghdam. Someone had shot them in the legs beforehand to prevent them from running away. Afterwards they were axed. On February 29th my colleagues filmed them. When we next filmed on March 2 these corpses had been scalped. What kind of strange game was that?

– As the rescued residents of Khojaly say, all that was organized to create grounds for my resignation. I don’t think that the Armenians, who had manifested a clear and knowledgeable approach to such situations, would have allowed Azerbaijanis to obtain evidence that tied them to fascist acts. If I declare that it was the fault of the Azerbaijani opposition I could be blamed for slander. But the overall picture of the conclusions is as follows: the Armenians had, in any case, provided a corridor to let the civilians escape. Why then would they shoot? As soon as Khojaly was surrounded by tanks it was necessary to immediately lead the civilians out. Earlier I had given similar orders regarding Shushi – to evacuate women and children and to leave only men in the city. It’s one of the laws of war – civilians must be rescued. My conduct was appropriate and unambiguous – I gave such orders, but why they weren’t followed in Khojaly is not clear to me.