Why do millennials repatriate? – Araz Kekejian 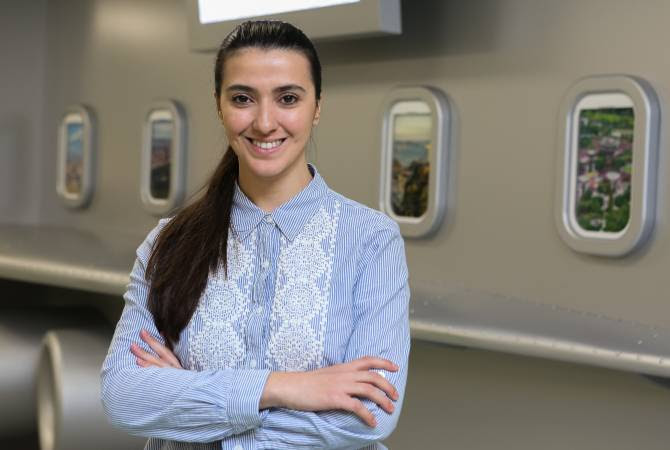 What makes Armenia attractive to millennials? Why do they decide to repatriate, change their lifestyle and enjoy being in a long-term relationship with their homeland? Where do they study, work, and what impact can they have?

These questions and more were answered in Araz Kekejian’s interview, sharing her experience as a millennial repatriate from Beirut, Lebanon. She moved to Armenia in 2016 and is currently Project Manager at Repat Armenia’s partner bank, Ameriabank.

Born and raised in Lebanon, Araz graduated from Armenian school, while staying active in the Armenian community. She studied Computer Science at the Lebanese University and worked for different companies in the meantime.

-Araz, could you please tell us about your connection to the Armenian community in Beirut?

-I was involved from a young age, especially in scouts. My responsibilities as an active member of the Armenian community played a great role in my self-development process. The community gave me one of the most important tools – the Armenian language, which has become the language I think in, as well as communicate. I also inherited and received knowledge about Armenian history, culture, and the way of life, all the while proud of my Armenian heritage.

My first years were spent speaking and hearing Armenia, so despite my education also including Arabic and French, my thoughts were always in my mother tongue. I was always drawn to the beauty of the country, despite never having been here. I felt very privileged to be Armenian and always felt that sense of ownership and responsibility.

-Yesterday, we met an interesting repat from Russia; he’d traveled around the world and admired how Armenians in the Middle East felt that ownership, respected the responsibility of their heritage. Those from the West, however, in Europe and America, do not have the same sense of pride as per his observations. This is interesting to note. However, putting the emotional attachments aside, what is it that made you repatriate to Armenia?

–Yes, I have seen this as well. In Lebanon, while there is diversity, we consider ourselves Lebanese Armenian, always stressing our identity. In France, for example, you consider yourself French for the most part, not just a citizen of the country. Nobody will ask you where you come from there. You are French for those living around you as well. It is a very different culture. As for my moving, life occurs. I kept thinking that if I stay, the likelihood of meeting non-Armenians is much higher, falling in love with a non-Armenian is more likely, and changing the flow of my life would have been easy. I decided to try Birthright Armenia, coming to Armenia for a full year. I simply fell in love with the country. The day I arrived was the beginning of something new, something different. I felt an energy, as if I was different. Of course, those feelings were not enough for me to just move. However, I’d left my job, was done with my studies, and Birthright Armenia had me buying a one-way ticket. I planned on staying for around ten months, but there were so many opportunities I came across in that time period that I began thinking about my future. What started off as a passion trip suddenly had the potential to construct the basis of the rest of my life.

-Could you tell us about your Birthright experience? Your first month and then your last month? What was it exactly that led to your ultimate decision? Where were these opportunities you mention? Was the decision something that popped up on you one day or did you gradually come to the realization that life here would make you happy?

–When I arrived in Armenia, everything was so emotional that I couldn’t even explain it. I would meet so many people from abroad, and staying with a host family, spending so much time with them, it was all pretty intense. It was one experience after another. I knew I could make a decision to stay pretty early on, though I certainly had my doubts. I didn’t know exactly what to do and was in constant transit between Lebanon and Armenia. My parents kept asking if I had made up my mind and I kept asking them for more time. Around the end of my time spent volunteering, I began looking into Master’s programs. The one I was honestly interested in had just opened up in AUA – Data Science, and I took that as a sign. It was the right moment.

-I was giving a workshop at Girls in Tech about data mining. It’s an amazing thing about Armenia that it’s so easy to connect with people. I started my workshop there and posted a photo, after which I was contacted and told my profile interested them very much. Soon, I was having a coffee with my current boss and HR specialist. It was a very informal meeting and it went great. Now, I’m a project manager. Currently working on a chatbot, as well as an NLP model which works in Armenian. Our key strategies are in Agile and data-driven projects. It’s more like a startup, working with Machine Learning developers, as well as Full-Stack. Interestingly enough, I was not originally planning on working for a bank; I come from an IT background. But now I know I’ve made the right choice, seeing how Ameriabank is oriented towards digital future. When I met Artyom Shamtsyan (Chief Innovation and Digital Officer), I really liked him as a person. I was really impressed by his experience as well as that of my team members. Who you work with is extremely important and I felt welcome and involved form the very first day at Ameriabank; it’s so comfortable here, and my co-workers are so friendly and helpful. There are so many advantages here in terms of professional growth and development, flexibility of my schedule and the ability to improve the quality of my work. You will get help whenever you need it. Plus, I live only ten minutes away. I am happy at Ameriabank.

-I was reading about data science: it’s one of the sexiest jobs of 2019. Are there many female data scientists in Armenia? What’s the market like?

–Very good question. The course that I taught was an intro to data mining; I had one student who took classes in machine learning, while the rest were new to the field. We did more preparation classes. We worked on the models, because tools alone are in constant change. If you know the models, you can just change the tools. How many data scientists? I don’t know if I can call them that because it was just a start. I was really impressed by their profiles, I had 3 aerospace engineers and girls with high-level education who attended the class. Some wanted to change their fields, others were already studying mathematics. I remember the girls being extremely tough on themselves, blaming their inefficiency for their failures in projects. They could be driven to quit easily. I spent a lot of time trying to explain that the process was normal, they could most certainly do it. I pushed them to do their best, kept in contact and encourage them to this day. It’s a very new field, however, and requires years to gain enough insight on it.

-How do you see the IT sector developing over the years? What about its impact on the regions?

-It’s great that Armenia has become a developing IT hub but we still have a lack of professionals in the field. This is great for newcomers, of course. I’m not saying they should move here, but it’s good to have exchange programs, for example. I have a volunteer doing Birthright Armenia right now who is volunteering at the Innovation Center. His experience was phenomenal and having him with us was pure gold. Even now, in the regions, with the Internet so readily available, people are freelancing from Gyumri and other places. I know an IT company with over 20 workers in Gyumri working thus. I think it’s just that it’s a matter of mindset. If we all said, “we can do this,” you will have professionals ready in a span of months. The revolution began changing this mindset, pushing people to better themselves. If we all do our best, there’s nothing we cannot overcome.