Armenian-Indian ties have great potential for development in pharmaceutical industry 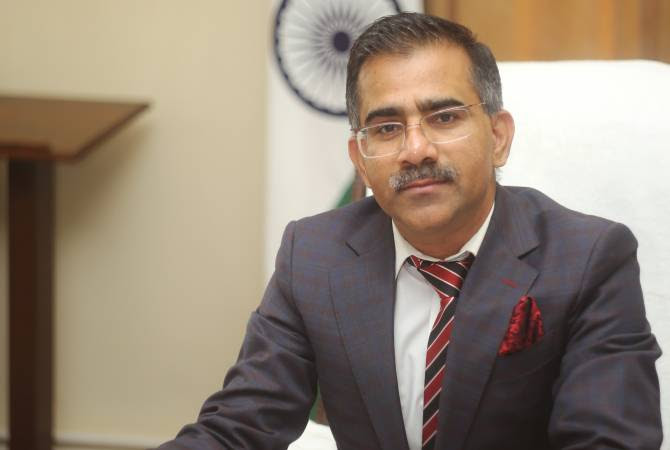 Embassy of India in Armenia and PHARMEXCIL-Pharmaceuticals Export Promotion Council supported by the Ministry of Commerce and Industry of the Government of India will be holding yet another India-Armenia Pharmaceutical Business Forum-Exhibition on November 10-13 in Yerevan.

To explore this field, and in general, to discuss the prospects of development of economic relations between the two countries, the press service of the Embassy spoke to Ambassador Extraordinary and Plenipotentiary of India to Armenia H. E. Mr. K․ D․ Dewal.

– Mr. Ambassador, how would you describe the current level of economic relations between India and Armenia and prospects for development, particularly in the field of pharmacy?

– The economic ties between the peoples of India and Armenia, in particular, trade relations have deep historical roots. They are also evolving today, encompassing many areas ranging from commerce to high technology and pharmaceuticals. The comprehensive legal framework existing between India and Armenia has contributed to the development of economic ties in recent years, as well as Armenian Government’s decision of November 2017 on ease of visa regime for Indian citizens to Armenia. To characterize the current level of trade between the two countries, let’s refer to statistics (for example, according to the RA State Revenue Committee). Thus, if during 2017 the export from India to Armenia made USD 29.56 mln, out of which USD 680.000 were pharmaceutical products, then in 2018, the export index amounted to USD 51.42 mln, of which USD 670.000 were pharmaceutical products. As you can see, the share of pharmaceutical products in the total volume of export of goods from India to Armenia is quite large. As for the export of Armenian products to India, its volumes in 2017 and 2018 were USD 3.29 mln and USD 566.100, respectively, and in the first half of 2018 and 2019 – USD 121.500 and USD 681.200, respectively. Meanwhile, pharmaceutical products from Armenia to India were exported in 2017 alone – USD 25.900 and in the first half of 2019 – USD 3000. Summing up the above data, I would like to point out that, although India and Armenia have quite extensive and effective political relations, the opportunities for economic cooperation are not sufficiently used. Events such as the India-Armenia Pharmaceutical Business Forum-Exhibition, where 28 leading Indian pharmaceutical companies under the auspices of PHARMEXCIL will present their products to Armenian companies, are filling that gap. It is represented worldwide, with many Indian companies receiving Certificates from World Health Organization, PIC / S (The Pharmaceutical Inspection Convention and Pharmaceutical Inspection Co-operation Scheme), the US Food and Drug Administration and European GMP, as well as documents certifying the quality, efficacy and safety of drugs. A large number of Indian pharmaceutical companies are developing their own medicines. As far as I know, the pharmaceutical industry in Armenia is also developing rapidly. So, Armenian-Indian ties in this field have great potential for development, and it is time for Indian and Armenian companies to realize this potential, not only in the field of drug export-import, but also to open joint ventures, exchange experiences as widely as possible and why not, co-develop drugs.

– Armenia is a member of the Eurasian Economic Union (EAEU). EAEU and India plan to start talks on signing a Free Trade Agreement (FTA). How will the signing of this Agreement affect Armenian-Indian economic relations?

The signing of the EAEU-India free trade Agreement will definitely have a positive impact on Armenian-Indian economic relations, as such agreements, first of all, implies liberalization of mutual trade through the establishment of favorable tariff and non-tariff regulation regimes. Under these conditions Indian companies will have the opportunity to enter the EAU 160 million market, and the EAEU companies will have the opportunity to enter India’s $ 1.2 billion market, which is essential for the parties to exchange complete and accurate information and to know each other well. Indian business is working very actively in this direction, and it is not accidental that the PHARMEXCIL delegation will visit EEU countries also apart from Armenia – to Belarus, Russia, and then Uzbekistan. I hope that the Armenian business community will also intensify its work to ensure its proper presence in the Indian market, and the Government of Armenia to assist entrepreneurs along the way. The Indian and Armenian peoples have many cultural similarities, including in the field of business culture. Indian and Armenian businessmen can do their best by working together to create greater value, promote prosperity in India and Armenia. And the signing of free trade Agreement between India and the EEU may be one of the tools that will open them up to greater cooperation opportunities.