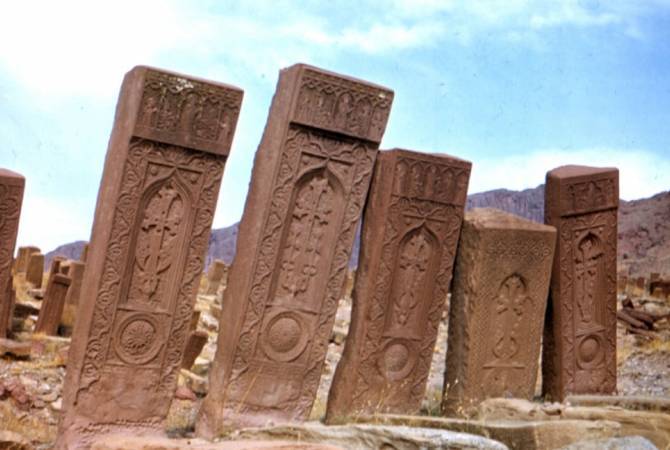 The Coordinating Council of Russian-Armenian Organizations has addressed Audrey Azoulay, UNESCO Director General, drawing her attention on the extermination of the Armenian cultural heritage in Azerbaijan.

“In connection with your first official visit to the Russian Federation from 5 to 7 March 2019 as Director General of UNESCO, the Coordinating Council of Russian-Armenian Organizations draws Your attention to the monstrous fact of vandalism that has taken place in the Republic of Azerbaijan. In the period from 1998 to 2005 in Azerbaijan, on the territory of the Nakhchivan Autonomous Republic, which in past has been a part of the historical Armenia, near the city of Julfa (Old Jugha), a targeted destruction of the cemetery has undertaken. This cemetery had thousands of medieval Armenian khachkars, i.e. tombstones.

According to the International Council on Monuments and Sites (ICOMOS), and according to a number of Western media sources and Armenian sources, as well, destruction of ancient monuments of Armenian culture has been organized by the Azerbaijani authorities. All khachkars in the Armenian cemetery were smashed by people in military uniforms, with help of heavy construction machinery. Large fragments of tombstones were loaded by cranes into wagons and transported by rail, probably, for use as construction materials. As for smaller fragments of monuments, they were loaded into trucks and dumped into the Araks River. And Julfa cemetery itself, which was one of the most grandiose monuments of Armenian culture, was turned into a shooting range…

The international community, unfortunately, has left this blatant act without the proper harsh condemnation of Azerbaijan. There were no decisive sanctions against this country, which organized this barbaric act of genocide against Armenian culture. Meanwhile, in 2010, UNESCO (United Nations’ specialized institution on the educational, scientific and cultural issues) included Armenian khachkars into the list of objects of intangible cultural heritage of the humankind. It is now generally recognized that the Armenian khachkars are masterpieces of world art. The largest museums throughout the world consider it an honor to have at least one khachkar in their collection.

Before destruction, the Armenian cemetery in Julfa was the world’s largest surviving medieval cemetery of khachkars. At the beginning of 20th century, 6,000 have been numbered there. By the end of 20th century, this number decreased to 3,000. And at the turn of 20th and 21th centuries, Azerbaijani vandals have brought their dirty work to the end. Only preserved photos now evidence former beauty of these Armenian monuments and the talent of the Armenian masters who have created them.

Dear Ms. Azoulay, the Coordinating Council of Russian-Armenian Organizations strongly condemns the barbaric attitude of the Azerbaijani authorities regarding the monuments of Armenian culture and art in the territory of present-day Azerbaijan. We appeal to You to assess the destruction of the Armenian khachkars in Julfa (Old Jugha). We also ask You to take measures to prevent anything similar in the future, both in Azerbaijan and around the world. For, the masterpieces of each nation are the patrimony of all humankind, undoubtedly.

Looking forward to Your constructive response”, reads the statement.