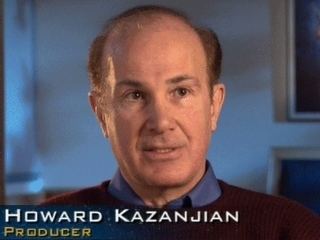 Nor Or, Los Angeles – So far in my series of influential Armenians, I’ve talked about author William Saroyan and internet entrepreneur Alexis Ohanian. This week, I have decided to write about Howard Kazanjian for two reasons– he is in a different industry than the first two, and has produced one of my favorite films (and I didn’t even know it).

Howard Kazanjian graduated from the University of Southern California in 1965, where he studied film. During his studies, he was able to work under major influencers like Alfred Hitchcock and Sam Peckinpah. While a student, Kazanjian pledged into a filmmaker’s fraternity and eventually became a part of the early Hollywood system known as The Dirty Dozen. Among these talented artists, was a crazy man with ideas on a film that would take a place in a galaxy far far away–George Lucas. George and Howard quickly became friends and even went on double dates with their girlfriends, now wives. However, among his many accomplishments, Kazanjian’s biggest feat was producing one of history’s most beloved Star Wars films: Return of the Jedi.

Early in his career, Howard Kazanjian worked as First Assistant Director for Alfred Hitchcock’s film Family Plot, and Second Assistant Director for Sam Peckinpah’s Wild Bunch. Kazanjian started his career by doing directorial work but took Hitchcock’s suggestion and moved to film production. This move is what gave Kazanjian the opportunity to produce two of the greatest films in Hollywood–Star Wars: Return of the Jedi and Indiana Jones: Raiders of the Lost Ark.

While researching Howard Kazanjian, I found something that I found pretty interesting. He was clever. During his work on Return of the Jedi, he came up with the idea to shoot the film under a fake name: Blue Harvest. This didn’t make much sense to me at first, so I kept reading and found out why. By shooting the production under a fake name, Kazanjian and his team were able to avoid price gouging from suppliers, which basically means they avoided overpaying when purchasing materials and tools for the production. They even went as far as printing shirts and hats with the fake name on them in order to make it more authentic.

As the producer, Howard was able to influence many of the decisions that ultimately made the already thriving franchise even more of a success. As a huge Star Wars fan, it was shocking to find out what a great impact he made on the series. What people also don’t realize is he went on to produce films like Demolition Man and Indiana Jones: Raiders of the Lost Ark, for which he won an Emmy Award. Although he has not produced much in the last decade, he is very much a part of the Star Wars community and still one of the most influential Armenians on this side of history.