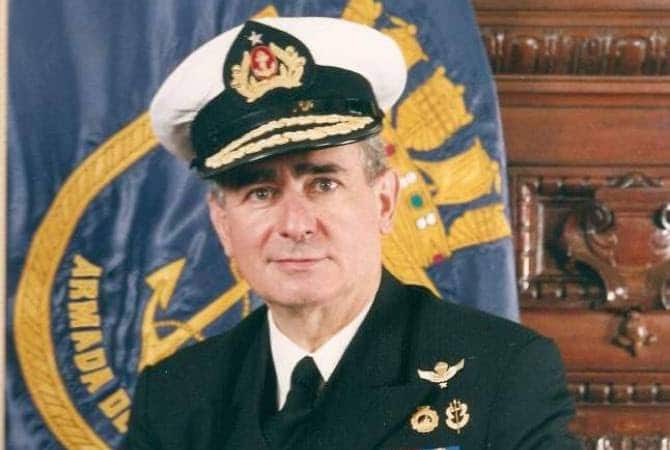 Hernán Couyoumdjian – Chilean Navy Admiral, gave an interview to ARMENPRESS talking about the Armenian community of Chile, the Armenian Army, as well as his activity.

-Mr. Couyoumdjian, how did you decide to enter naval forces? What has attracted you in that system?

-I was 14 years old when I entered the Naval Academy. I really did not know what it was, but I liked the sea, boats and sailing. We used to holiday by the sea and I was a good swimmer. As time went by and I got to know the Navy, I liked it more and more. The 5 years at the Academy were tough, but I managed well and, every year, got the first prize of my class, which was an incentive to go on.

-Looking back, what was the naval path you’ve passed? What interesting episodes will you remember?

-After graduating I spent 39 years in the Navy, some were very difficult and hard, others, even though hard, I enjoyed more.  The following stand out. Commanding officer of the Navy Commando Underwater Demolition Teams, Commanding Officer of “Yelcho” a survey, ocean tug and Antarctic supply ship, Commanding Officer of the training Ship Esmeralda ( 4 masted sailing ship  3.670 tons), on which we went to South Africa, Uruguay and crossed Cape Horn under sail, Commanding Officer of Destroyer “Blanco Encalada” operating with  the fleet. My year as Aid the Chief of the Navy, Admiral José Toribio Merino, a wise and just man. My 10 years as admiral in different posts. I have a theory that wherever you get sent to, you must work hard, motivate your people and enjoy it, which I did.  The cost of this wonderful life is leaving the family alone and not being there during the special occasions when the children are growing up.

-What has been the pledge of your success? With what principle have you been guided in contacts with colleagues and political figures?

-Always do your best. Be frank and look after relations with the people which surround you. Care for your subordinates, communicate and gain their trust. Be always truthful and never shun a task.

This morning I gave a lecture on Leadership to all the officers of the Naval Polytechnic Academy stressing these and other aspects.

With colleagues, mutual respect and help whenever you can. If God has given one talents, one must make the most of them and help others. With the political figures, openness and frankness; be tolerant and accept that there are people who can think different and show with actions that your love for country and humans is what moves you. If you are straightforward and truthful they will respect you.

-What do you think about the Armenian Armed Forces? In your opinion, what steps are needed for having a more powerful Army?

-I do not know them enough to give a full opinion. Anyway they have been very brave and effective in fighting the Azerbaijan to recover Nagorno Karabah. I visited the front in 2013 and got a very good impression of the men. Very motivated and prepared.

-If I’m not mistaken, this is your 3rd visit to Armenia, what changes do you see every time you visit the country?

-I have got to know the people better. More and better friends. Very positive changes, in particular to see more people, especially youth, speaking English and French.

-After working in naval forces for more than 40 years you started doing business. Please, tell me about what activity do you carry out now and in which field?

-It is now 17 years that I have been retired and have done many things in different areas. Today, further to non-profit activities in education, religion and cultural activities, I have a small company which imports and supplies forensic tools for criminal investigations and intelligence. These systems help to extract information from cell phones and computers to present as proof in court. Also more sophisticated detection, jamming and intelligence systems. My idea is to supply our Police and National Attorneys labs with the best tools and training for fighting crime. We also work with cyber defence to offer protection for cyber networks.

-Can you please talk a little about the Armenian community of Chile? How many Armenians live there, in which spheres they are mainly concentrated.

-The Armenian community is very small. My father Loris Couyoumdjian was the first President of the Armenian Community in 1957, although he and many others arrived in the 1930s. Today there are about 100 members registered in the Hay Dun, which represent with their families about 400 in all. There must be a couple of hundred more around the country so in total, less than a thousand. This is very few in comparison with Argentina 130.000. Originally they worked in commerce and industry: textiles, carpets, socks, retail, jewellery, etc. the following generation produced many professionals: academicians, diplomats, journalists, doctors. Amongst the well known are Enrique Melkonian, Ambassador in the Ministry of Foreign Affairs, also President of the Association of Diplomats, Tamara Avetikian, journalist of the main newspaper El Mercurio, Ambassador Lucía Avetikian, Juan Pablo Couyoumdjian, PhD in Economics, Professor at the Universidad del Desarrollo and etc.