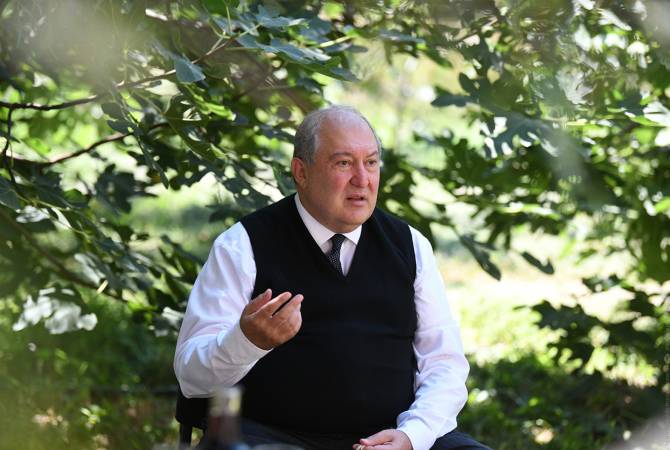 President Armen Sarkissian has traveled to Armenia’s northeastern province of Tavush and visited the border town of Chinari, which is one of the region’s villages to have come under cross-border attacks by Azerbaijan as recently as mid-July.

Sarkissian was accompanied by Governor of Tavush Hayk Chobanyan and the Primate of the Diocese of Tavush of the Armenian Church Bishop Bagrat Galstyanyan, the President’s Office said in a news release.

The president visited the village school, which was heavily damaged by Azerbaijani artillery strikes.

Sarkissian reiterated his support to the children “as president, as an individual and as the Sarkissian family”.

“In a way I have become the friend of this school and this village”, he told the children. “Consider that this is my school as well, in case of any issues tell me. I am speaking about the entire village”. He said his office will resolve the school building’s heating problem.

He thanked the residents of Chinari for standing by the country’s men and women in uniform and keeping the borders safe.

The President noted the unique nature of the village, saying: “This is paradise. People here live in paradise, while many of our countrymen don’t even know that paradise is right next to them”.

“We will win if we are all united, in a united Armenia, Artsakh and Diaspora”, he said. “I am very optimistic and confident that we will overcome all difficulties through unity. All the greats have spoken about this. We are learning poems about our national unity at schools. But I believe that aside from knowing these poems, reciting, analyzing and realizing them, we should also simply feel them, feel that the Armenian next to you is your brother or sister. In this case no one can defeat you in life”.

As part of his visit to the province, the President also met with the troops and awarded gifts to several distinguished servicemen.

He praised the troops as heroes, noting that the people of Armenia are proud of the military.

“The president noted that our servicemen are the ones who truly shape our history and everyone owes them for the peace and security”.