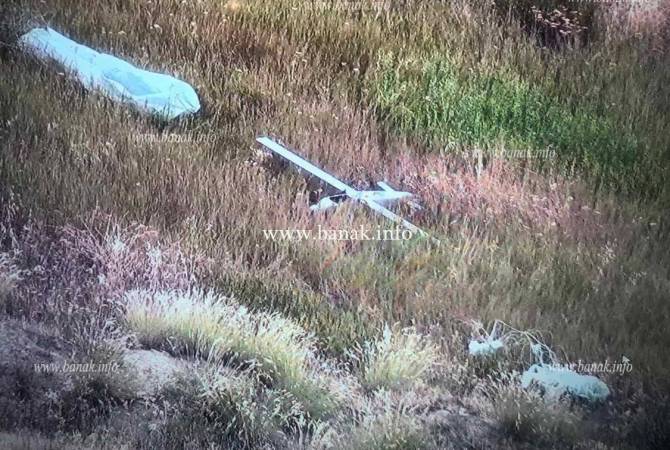 An Armenian army news website banak.info has obtained exclusive images of the Azerbaijani UAV which was downed by Armenian Armed Forces amid the July 12-13 overnight clashes.

The drone was shot down when Azerbaijan launched an attack on Armenia in the direction of the Tavush province. It used heavy artillery fire and mortar shells. The Azerbaijani indiscriminate shelling has hit civilian homes in the town of Chinari.

The Azerbaijani military has fired three 120mm mortar shells at the Armenian town of Chinari in the Tavush Province.

“One of the shells has hit a civilian house, two hit the yard. There are no losses”, Ministry of Defense spokesperson Shushan Stepanyan said on Facebook.

In the morning of July 13, the Azerbaijani military again started to shell the Armenian positions.

The Armenian authorities have notified the OSCE and the CSTO about the Azerbaijani aggression.

Armenian Prime Minister Nikol Pashinyan strictly condemned Azerbaijan’s provocative actions, and said that the entire responsibility for the unpredictable consequences of regional destabilization will fall on the leadership of Azerbaijan.

The Collective Security Treaty Organization (CSTO) Secretary General Stanislav Zas has initiated an emergency session of the Permanent Council to discuss the situation.

The Russian foreign ministry announced that the further escalation which threatens regional security is inadmissible.