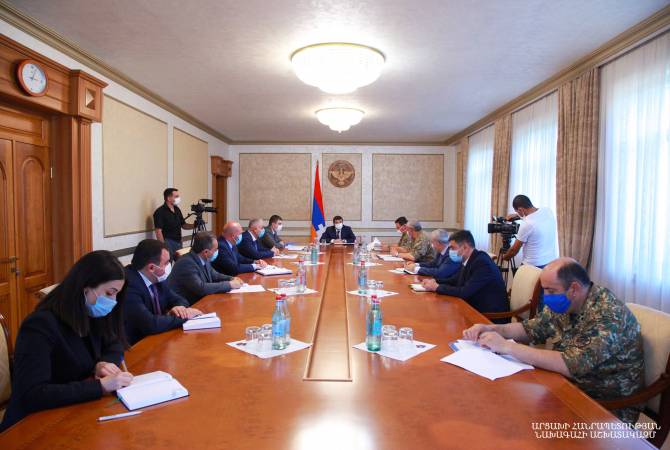 Artsakh Republic President Arayik Harutyunyan convoked an extended consultation dedicated to the housing issues of the Defense Army’s retired officers and those on service being on the waiting list on July 3.

As ARMENPRESS was informed from the press service of the Artsakh President’s Office, State Minister Grigory Martirosyan and Defense Minister Jalal Harutyunyan delivered corresponding reports on the number of families of officers, their distribution by regions and the required financial expenses.

The Republic’s President stated that the urgent solution of the issue is at the spotlight of both Artsakh and Armenian authorities, and with joint efforts the project must be fully realized by the end of 2023. Within this context, the Head of the State gave instructions to the heads of concerned bodies and institutions present at the meeting on starting the house construction activities by the end of the year.
Arayik Harutyunyan underlined that relevant mechanisms should be elaborated for reducing administration in this process and operative solution of the problematic issues in this regard.

Minister of Urban Development Aram Sargsyan, Minister of Labor, Social and Housing Issues Samvel Avanesyan and other officials participated in the consultation.