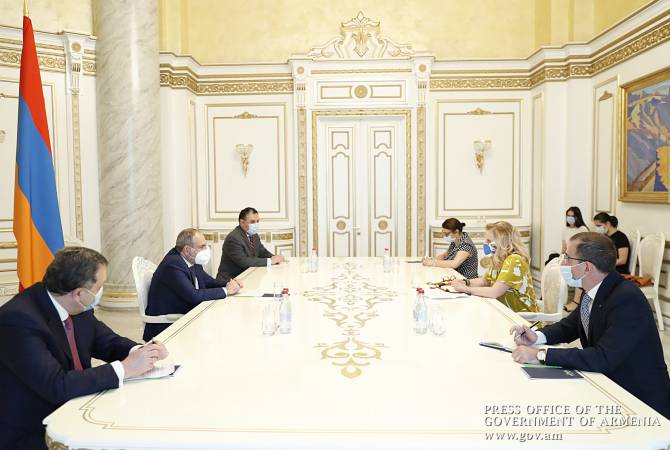 “Armenia finds itself at an active stage of democratic reforms and we are determined to advance the agenda in a bid to strengthen democratic institutions: form a truly independent judiciary, provide guarantees for free elections, wage an effective fight against corruption, and achieve other priority objective. CoE’s assistance is of great importance in this context,” Nikol Pashinyan said.

The parties next referred to Armenia’s democratic agenda. Nikol Pashinyan stressed that his government prioritizes the consistent implementation of reforms and the strengthening of public institutions, which is meant to guarantee the free will of the citizens of the Republic of Armenia, the independence of the judiciary, governance transparency, freedom of speech, and the Government of Armenia will be consistent in advancing this primary agenda.

Echoing the Prime Minister’s remarks, the Head of the Council of Europe Armenia Office pointed out that sustainable and strong democracy is underpinned by powerful, transparent and reliable public institutions, and the government’s steps are welcome in this respect.

The interlocutors next touched upon the judicial reform. Nikol Pashinyan noted that the reform is aimed at restoring public confidence in the judiciary. In turn, Natalia Vutova said that the Council of Europe will continue to provide advisory assistance in this process.

Taking the opportunity, Nikol Pashinyan and Natalia Vutova exchanged views on the non-violent velvet revolution and the materialization of revolutionary values. Natalia Vutova said she was glad to be in Armenia during the days of the revolution, feel the atmosphere of solidarity and be part of those historical events for Armenia and the Armenian people.

Thankful for her kind remarks, Nikol Pashinyan noted that the Velvet Revolution was meant as a process of historical transformation and value change for Armenia and its people, and it continues to this day. The Premier stressed that his government will continue its mission to fulfill the goals of the revolution and the expectations of Armenia’s citizens. This is not an easy task, but there is no alternative to building a free and developed Armenia.