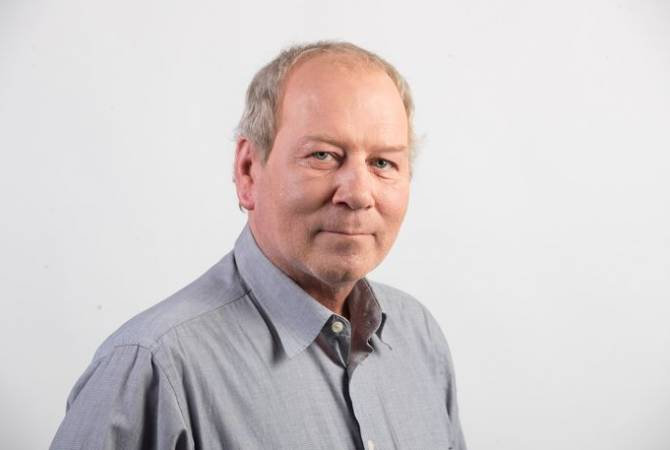 Eminent Estonian journalist Ainar Ruussaar, in his editorial in one of the largest newspapers in the country – Eesti Päevaleht, tells the story of his visit to Aghdam in 1990, where he met with the “gray wolves”, Colonel Surat Huseynov /who became Prime Minister of Azerbaijan later/. Below is the translation of the article.

The battles that have started to rumble again in the Southern Caucasus are not the number one topic of daily news. Yet Armenia and Azerbaijan are aiming weapons at each other again, and it has claimed tens of lives on both sides this week, more in recent decades than any viral infection in either country (before COVID). The still-unsolved bloody quarrel between the neighbours in the Caucasus is one of the many examples that history has known in various parts of the world for millennia.

Baku-Agdam, 1990 30 years ago, on a late evening in the Azeri capital of Baku, a train with four carriages was waiting to leave the city on the edge of Nagorno-Karabakh. The windows of the train were shredded by bullet holes, and the four wagons were carrying six wagons worth of people travelling from the capital to the frontline city, among them nursing mothers, elderly men and military personnel. As I walked into the night passenger train, I knew five things. First of all, I only knew the destination, Agdam, by the name of a cheap spirit wine with a horrible taste. It was bought by students in Tartu during the week before the scholarship payday. Second, I had previously reflected the battles between the Caucasians, and I considered myself quite able to defend myself mentally against the emotions Northerners were unaccustomed to. Third, I knew where to hide and distribute all the cash I had. The fourth thing I knew was that the greatest danger might come from strangers suddenly becoming friends with you. Fifth, I knew who and in what amount to bribe in today’s terms if great trouble arose.

This knowledge did not serve me well in the Azerbaijani-Armenian war 30 years ago. On the contrary, everything went completely differently.

The four wagons chock full of people rattled along all night, the numerous bullet holes in their windows did not give enough fresh air to the passengers, and neither could they extricate the nicotine of men who were constantly smoking. In the morning, the train arrived at Agdam. Right behind the station building, two houses that had apparently been hit by a missile were flaming; a tank was burning a little further away.

The place crawled with azer (Azerbaijani – edit.) military personnel, and battle sounds were intermittently heard from some distance away. Fortunately, three men in military camo uniforms came immediately to check my documents, one of them carrying two Kalashnikov automatic rifles on his right shoulder, a grenade launcher on his left shoulder, and six hand grenades on his belt. The “Western” journalist was obviously an interesting find for them, and that’s how I ended up with them for a few days. The man armed to the teeth showed a vicious wolf-face emblem with exposed fangs, sewn on his uniform’s sleeve. It marked their troops.

For the men with wolf emblems, hosting a journalist was clearly a nice break in the warfare. For starters, they offered me local wine (military men!) from a dirty plastic bottle, which was not at all as horrible as the scary awful Agdam sold in Tartu stores. Then they drove me to the edge of town, where there were three charred bodies lying next to a burnt tank hit by Armenians, around whom dozens of women were crying loudly. It was an appalling sight, and I confessed to myself that I still had to improve my emotional protection a lot. Then the “wolves” took me to see their commander.

In the partially shattered suburb of Agdam, a man made a loud speech in front of a line of soldiers. My request for an interview was answered by a contemptuous look, and so ended my brief meeting with the legendary colonel, Surat Huseynov.

The troops he led defended the Agdam region, but left it to the Armenians in the summer of 1993 (Agdam fell on 23 July 1993). Huseynov was one of the leaders of Azerbaijan’s market mafia during the disintegration of the Soviet Union and, among other things, financed the emerging people’s militia there. After the defeat in Karabakh and its outskirts, Huseynov deployed his troops towards the capital Baku with the aim of taking down Azerbaijan’s first freely elected President, Abulfaz Elchibey, by means of automatic weapons. The President who anticipated the military coup fled the capital. A clever Caucasian “fox” and former local communist leader Heidar Aliyev stepped into his shoes, ending the putsch and appointing Huseynov as prime minister. The career of Huseynov, a man with the characteristics of a mob leader, did not last long; a temporary escape to Russia to evade an expected punishment did not save him either, and in 1999 he was sentenced to life in prison by a court in Azerbaijan. Meanwhile, Ilham Aliyev, the son of the country’s President, while filling in for the latter, pardoned Colonel Huseynov, and he now lives modestly in a three-storey villa near Baku in his ripe old age of 60. And possibly earns a pension supplement from keeping the local markets in check.

Lost the money and the watch

The “grey wolves” drove me to their base. They occasionally went to fight battles in the surrounding mountainous forest, and they would not allow me to go along with them. There was a wave of weapon rattle and explosions in the distance, and sometimes some ragged and bloody soldiers arrived at the “wolf base”, but otherwise soup and grilled meat were cooked. On the third day, I got sick of it and asked to be taken back to the railway station at Agdam.

The same two friendly guys I’d met a few days earlier offered me a ride. In a lonely mountain valley, they stopped the SUV, ordered me out of the car, pulled a bullet in the chambers of their automatics, and took the money from my pocket and the watch from my wrist. They didn’t think to look for money in my underpants. They then took me amicably to the Agdam railway station, to the bullet-ridden four-wagon train heading into the capital. I didn’t have to buy a ticket; the men cleared everything with the conductor in their own language. This confirmed my earlier experience that new friends may also be robbers, and that you must hide some of your money in your underwear.

At Baku Airport, I could see from the teller’s face that there were tickets for the Donetsk-Tallinn flight available, even though the airport information indicated that everything had been sold out. I paid double the amount in cash and landed in Tallinn, thus completing the fifth point of my acquired knowledge. I believed that riding a train straight to the frontline would be the only such experience in my life. Unfortunately, it wasn’t. A year later, a passenger train took me from the Croatian capital Zagreb straight to Karlovac, which was on fire and was eagerly held under fire by Serbian forces when the train arrived at the station.

War or communication? All historical ethnic, religious and territorial disputes are finally tested by war, threats, or communication skills. When being at war, everyone states that there is a need to negotiate, and then they set out their own conditions that the other party cannot fulfil. At present, Azerbaijan claims that it may interrupt oil and gas supplies to Europe because of the war that broke out again; Armenia is alarming Europe with the risk that the Azeris could shoot up Metsamor nuclear power plant.

The battered Mi-24 helicopters from 30 years ago have been replaced by drones.

The war in the Southern Caucasus has now spilled out of Nagorno-Karabakh. The battered Mi-24 helicopters from 30 years ago have been replaced by drones, and hostile hackers are conducting numerous cyber-attacks from both sides. The US, the European Union and Russia are inviting the historical opponents to exercise restraint and to come to a round table. It is true, however, that the dozens of victims of the rekindled war include 76-year-old azer Aziz Azizov who was living in Agdam and 20-year-old junior sergeant Sos Elbakyan of the Armenian Army.

Who holds the key to this centuries-long feud?

Ainar Ruussaar has been a journalist for BNS, ERR and Postimees; he is now a teacher at Kohtla-Järve Gymnasium. Twice a month in the LP, he compares the current events with similar events from the past.