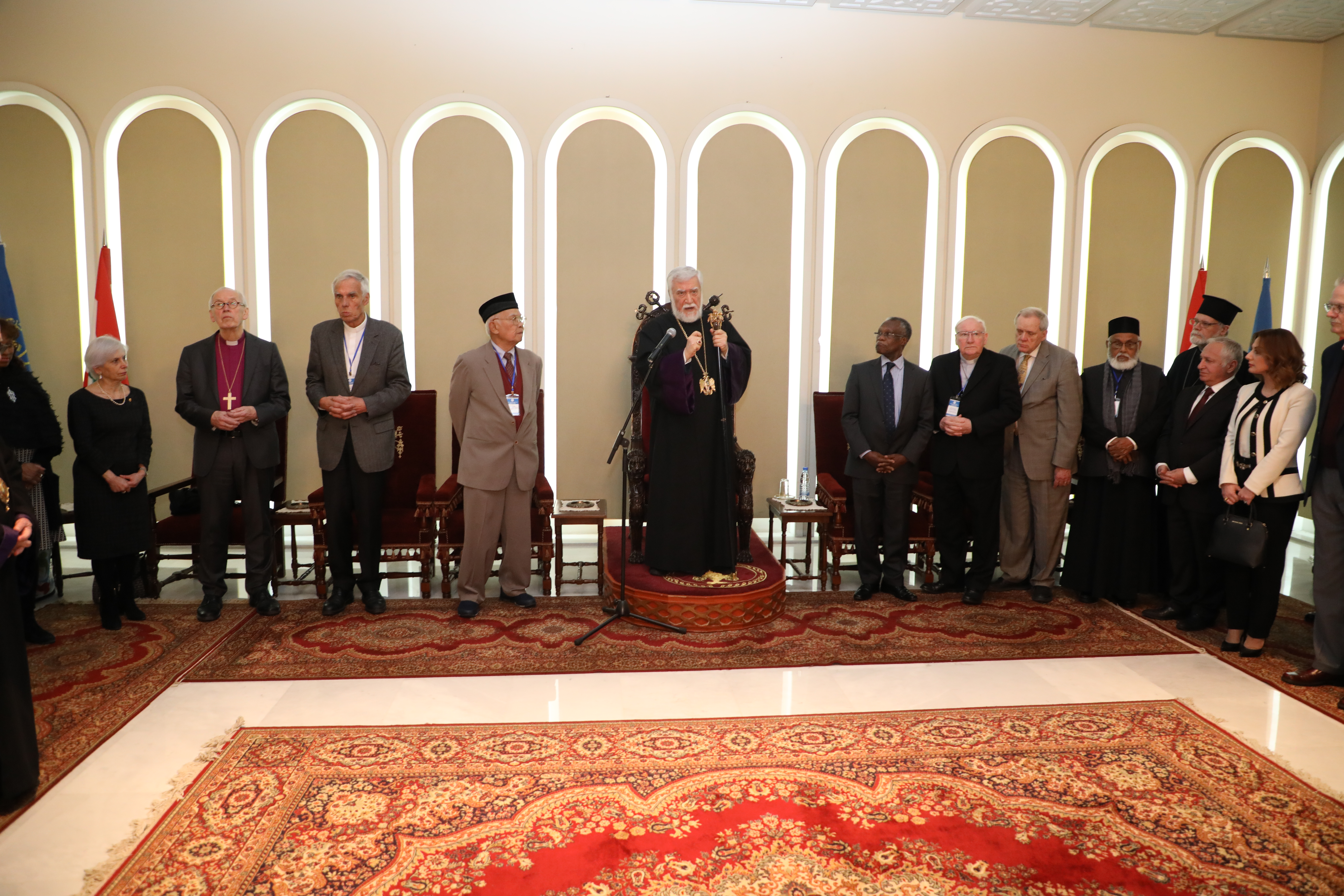 On January 31, 2020-February 2, 2020 His Holiness Aram I hosted a group of twenty five seasoned ecumenical church leaders to consider the present ecumenical realities, problems and challenges in order to seek new and relevant ways to articulate a forward-looking vision. The selected global church leaders came from Lebanon, Switzerland Ghana, the Vatican, India, Thailand, the United States of America, Finland, Sweden, Kenya, Indonesia, Burundi, Jordan, Germany, and South Korea. The leaders expressed their appreciation for the honour of being invited and for the gift of extraordinary hospitality given by His Holiness Aram and all of those who assisted him in hosting them.

The meeting was held at the Armenian Catholicosate of Cilicia, in Antelias, Lebanon. The venue was surrounded by the images of artistic and architectural beauty of the church and the sacred remembrances of the Armenian Genocide – a living reminder of how this church has been sustained through nearly-unimaginable crisis, a sign of God’s continuing grace and the power of hope.

At the same time, the meeting was held very soon after the change of Lebanese government leaders and continued episodes of social unrest in Lebanon. During this time, the Armenian Catholicosate of Cilicia joined other Christian religious leaders and global leaders in urging the protesters to give the new government a chance to address the deepening economic and financial crisis in Lebanon. The leading Lebanese newspaper, the Daily Star, featured this invitation.

The purpose of the global church leaders’ meeting was to draft a statement that would call the churches, ecumenical organizations and our societies to a more responsive and inclusive ecumenical vision. The purpose came from the conviction of His Holiness that such a meeting would provide the opportunity to share experiences, concerns, and new perspectives that may open up dialogue within the churches, ecumenical organizations and our societies. The importance of the meeting was covered by the church’s media outlets and local media, including the national television network.

On Saturday, February 1st, a reception in honour of the church leaders’ visit and their purpose for meeting was hosted by His Holiness. Top Lebanese religious, civic and government leaders were present along with special guests and hosts from the church. The former General Secretary of the World Council of Churches and currently a highly

commissioned government official of the Kenyan government working on matters of reconciliation in the country, the Rev. Dr. Sam Kobia, was honoured with one of the top awards of His Holiness at the reception. Bishop Dr. Soritua Nababan, Former Vice Moderator and President of the World Council of Churches and Christian Churches in Asia, was also awarded.

On Sunday, February 2nd, the church leaders were special guests of His Holiness at the Divine Liturgy held at the Cathedral of the Armenian Catholicosate of Cilicia. Following the service the church leaders visited the Seminary and Monastery related to the church located on the mountain in Bikfaya, Lebanon. They completed their visit with a celebration dinner following.

The meeting ended with the following affirmations.

The final formal statement, resulting from the meeting, will assess the current ecumenical challenges and opportunities today. It will also make recommendations to call the churches, ecumenical organizations and societies to a more responsive and inclusive ecumenical vision. It will be shared by the end of February, 2020. It will be circulated widely. The statement promises to be a groundbreaking document to help lead the church’s witness to unity, justice and mission now and in the future.