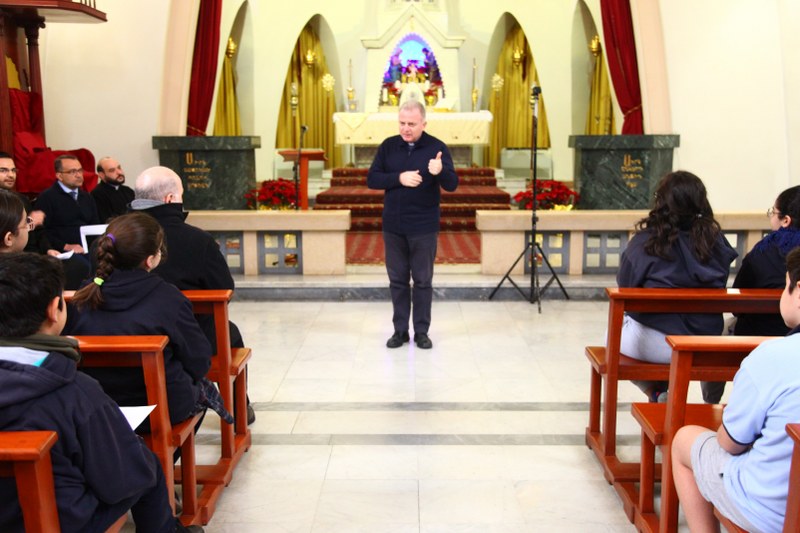 For the fourth consecutive year, the week of the Union of the Churches is celebrated in Mesrobian. The week extends from 18th to 25th of January.

On January 22, Mesrobian’s Spiritual Superintendent Office organized a student gathering at St. Savior Armenian Catholic Church. During the gathering, the students were introduced to the brief history of the Armenian Church’s 3 denominations and to the idea of the union of the churches.

Speeches were delivered by Father Anania Koujanian, Vicar of the Primate of Armenian Apostolic Diocese of Lebanon, Rev. Raffi Messerlian, Pastor of the Armenian Evangelical Church of Nor Marash, and Father Sebouh Garabedian, Parish priest of the Armenian Catholic Holy Cross Church. The gathering was run by Mesrobian’s Spiritual Superintendent Father Raffi Hovhannessian.

After the Lord’s Prayer and the opening remarks by Mrs. Salpy Keshishian, the teacher of Religion at Mesrobian, the Armenian clergymen explained to the students that the Church is one despite its different denominations. They emphasized the notion that the most essential elements in the church are faith, love, prayer, Bible, and service, through which all Christians unite. They also mentioned that the denominations cannot separate the believers from each other, for the Father of all is the same, and to Him are addressed all prayers, requests and praise. Afterward, the student of Mesrobian read thoughts about the Armenian school, priests and churches.

Father Raffi Hovhannessian expressed his gratitude to Mesrobian’s principal and to the participants in this gathering, wishing that Mesrobian’s students would always live and think in a united spirit.

The gathering ended with the prayer dedicated to the wellbeing of the Union of the Churches.