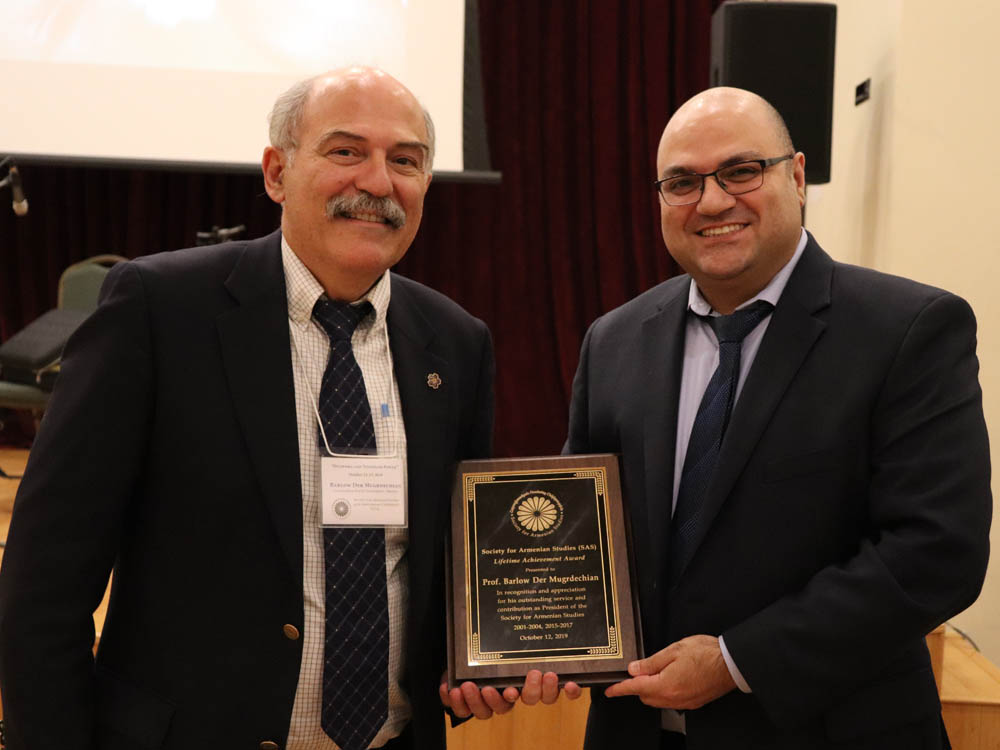 On Saturday, October 12, 2019 the Society for Armenian Studies (SAS) held its 45th Anniversary Banquet at the Organization of Istanbul Armenians Banquet Hall in Winnetka, California. The Banquet was sponsored by the Organization of Istanbul Armenians (OIA). Over 130 people attended the Banquet, including members of the greater Los Angeles community, as well as participants of the Society for Armenian Studies 45th Anniversary International Conference on the Armenian Diaspora that took place October 12-13 at the University of California, Los Angeles. Academic community members of the University of Southern California and UCLA, which were among the co-sponsors of the SAS conference, also attended the banquet.

Prof. Barlow Der Mugrdechian (Director of the Armenian Studies Program at California State University, Fresno) served as the Master of Ceremonies of the Banquet. SAS President Dr. Bedross Der Matossian (University of Nebraska-Lincoln) welcomed the guests and thanked the Organization of Istanbul Armenians (OIA) for hosting the 45th Anniversary Banquet. In his remarks Dr. Der Matossian outlined the initiatives that the SAS has undertaken since 2018. These new initiatives included awarding of new SAS Travel and Research Grants to graduate students, establishing the SAS podcast series, starting a SAS Publication Series, establishing the Nina G. Garsoïan Graduate Research Grant for Ancient and Early Mediaeval Armenian History, and the beginning of e-Entries of the Society for Armenian Studies (e-SAS), a website that was recently launched.

Furthermore, Dr. Der Matossian announced that the Journal of the Society for Armenian Studies (JSAS) will henceforth be published by the prestigious Brill publishing house. Dr. Der Matossian concluded his remarks by outlining the future projects of the SAS and emphasizing the necessity of adequate financial support for the implementation of these projects.

SAS President Dr. Der Matossian then awarded the Society Armenian Studies (SAS) “Lifetime Achievement Award” to past presidents. Among the awardees present at the Banquet were Prof. Kevork B. Bardakjian, Marie Manoogian Professor of Armenian Language and Literatures at the University of Michigan, Ann Arbor, and Prof. Barlow Der Mugrdechian, the Director of the Armenian Studies Program at California State University, Fresno. Dr. Der Matossian highlighted the unconditional support that Prof. Der Mugrdechian has rendered to the Society for the past several decades.

Der Matossian also awarded a “Lifetime Achievement Award” to Dr. Khachig Tölölyan (Professor of English and Comparative Literature at Wesleyan University) and founding editor of the Diaspora: A Journal of Transnational Studies, a Zoryan Institute publication.

Archbishop Levon Zekiyan, the Armenian Catholic Archeparch of Istanbul concluded the banquet with his congratulatory words and a prayer.