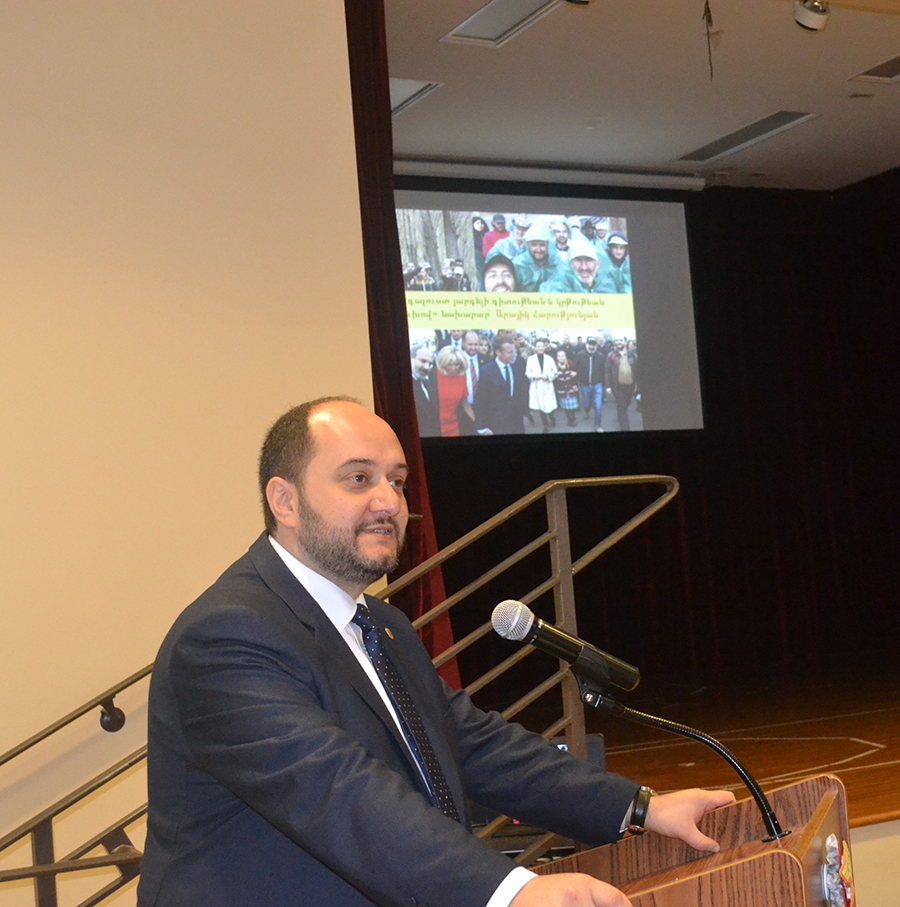 On Wednesday, January 16, Mr. Arayik Harutyunyan, Minister of Education and Science of the Republic of Armenia visited Merdinian School in Sherman Oaks, CA, accompanied by John Shirajian, President of Armenian Engineers and Scientists of America (AESA), Jirayr Abrahamyan, President of the Alumni Association of the Polytechnic Institute of Armenia, and Dr. Vardan Gevorkyan. The students greeted Mr. Harutyunyan in the Aram and Anahis D. Boolghoorjian Hall of the School singing the song “Dukhov.” After Principal Lina Arslanian’s welcoming words and Armenian language teacher Aline Shirajian’s introduction about the background of the School, Rev. Serop Megerditchian, Merdinian Board member and Pastor of the Armenian Cilicia Evangelical Church of Pasadena, greeted the Minister and the guests and talked about the significance of the educational work and the mission of the Armenian Evangelicals world-wide – in the Diaspora and in Armenia, highlighting Armenian Missionary Association of America’s (AMAA) Khoren and Shooshanig Avedisian School in Yerevan. Minister Harutyunyan addressed the students and answered questions directed to him by some of the students regarding the education and the school system in Armenia, and concluded his remarks emphasizing the importance of the Armenian schools in the Diaspora. The students presented a few patriotic songs dedicated to Yerevan, which was greatly appreciated by the Minister.  The program ended with a prayer by Rev. Megerditchian. A reception followed the program in the faculty lounge, where Faculty and Board members continued their conversations with the guests in an intimate atmosphere.