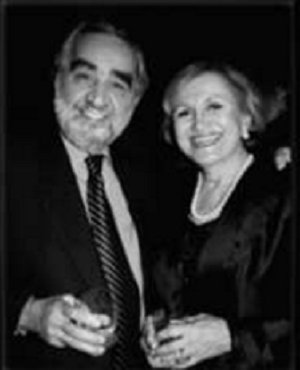 ONE OF ITS PILLARS,

NOR OR , LOS ANGELES –  The Armenian Assembly of America (Assembly) mourns the loss of one of its pillars since the very beginning of its establishment, Mrs. Anna Hovnanian, and offers its heartfelt condolences to her family and friends.

She has been right there, alongside her husband, Hirair from the early days of the Assembly’s inception at Airlie, Virginia in the 1970s to the devastating earthquake in Armenia in 1988 and through the Karabakh movement and Armenia’s independence. Anna and Hirair have been an integral part of the Assembly serving as a guiding light throughout the many decades. Her unwavering support, hard work, and dedication helped shape the Assembly into what it is today.

Anna was a Life Trustee of the Armenian Assembly, but did much more than support the organization. She and her husband were the gracious hosts, and entertained at their beautiful house, which was always filled with Armenian music and dancing. During the early years of the Assembly’s summer internship program in Washington, D.C., now called the Terjenian-Thomas Assembly Internship Program, Anna and Hirair generously hosted the numerous intern classes in their New Jersey home for a weekend filled with activities with as many as thirty  to forty college-age students at a time. Assembly intern alumni still have fond memories of their time with the Hovnanians during their participation in the summer internship program, and speak affectionately about Anna.

Hirair also spoke to others at the Assembly about Anna’s unwavering fortitude and determination, as well as her total confidence and loyalty, and credited her as the inspiration for his life’s work and passion for Armenia and the betterment of the Armenian people. Like Hirair, Anna looked to foster the next generation of Armenian leaders. Her dedication to young people is evident through her work within the Hirair and Anna Hovnanian Foundation, where Anna hoped to encourage and develop the artistic talent and higher education of the Armenian youth through scholarships and grants to various organizations and students. She was a major force with the Foundation, and helped shape many lives.

Even with her full responsibilities as a wife and mother, Anna never let go of her artistic talents. Wherever she traveled, she used the opportunity to visit the studios of the artists she admired, including Rafael Atoian, HagopHagopian, and Jean Jansem, who once painted their portraits. The Assembly applauded Anna’s artist talents and showcased her personal exhibition of paintings which were on display in Yerevan on July 18, 2012.