AraSarafian to present SarkisKarayan’smassive volume about Armenians of Ottoman Turkey 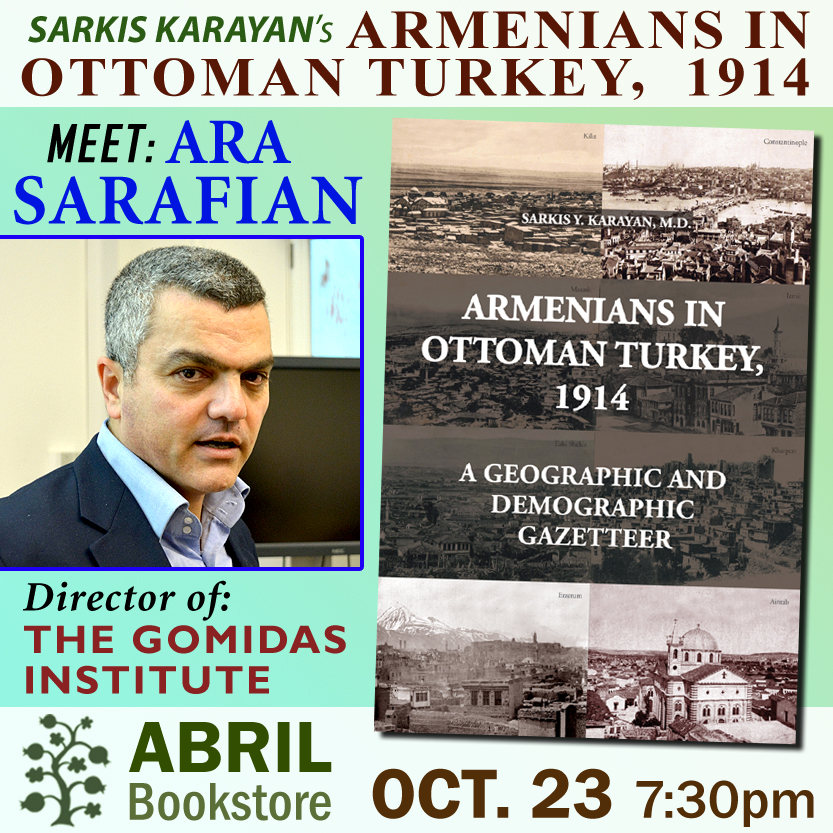 NOR OR , LOS ANGELES –  Director of Gomidas Institute of London, ARA SARAFIAN will be in town to present the newly released book by Dr. Sarkis Y. Karayan titled, ARMENIANS IN OTTOMAN TURKEY, 1914: A Geographic and Demographic Gazetteer on TUESDAY, OCTOBER 23, 2018 at 7:30pm at ABRIL BOOKSTORE – 415 E. Broadway, Glendale, CA. Admission is free with reception to follow.

ARMENIANS IN OTTOMAN TURKEY, 1914 is a mammoth book written by Dr. Sarkis Y. Karayan. It is based around a critical listing of over 4,000 Armenian inhabited towns and villages, replete with their old and new names, geographical co-ordinates, statistics about their Armenian inhabitants and full citation of sources. One of the key points of analysis in Karayan’s work is his estimate of the number of Armenians who perished in the Armenian Genocide. Karayan argues that the number Armenians in the Ottoman Empire on the eve of WWI could have been as high as 2.5 million people, and the number of victims in the Genocide over 2 million people. The volume includes a long introduction, with maps and statistics, as well as an appendix and detailed index. Unfortunately, Dr. Karayan passed away while his work was being prepared for publication, but AraSarafian of the Gomidas Institute will discuss the institute’s current activities, and the significance of Dr. Karayan’s new book.

ARA SARAFIAN is the executive-director of the Gomidas Institute, which has been at the forefront of Armenian Genocide studies for almost 30 years. At the core of its work are a number of seminal works, as well as other activities engaging the Armenian Genocide and its legacy in modern Turkey. No other Armenian institution in the diaspora has a comparable publication record nor level of engagement in Turkey as the Gomidas Institute.