Home   |   Diaspora News   |   HUNDREDS OF GUESTS FROM ACROSS THE U.S. CELEBRATE ANNIE SIMONIAN TOTAH AT THE ARMENIAN ASSEMBLY’S NATIONAL GALA

HUNDREDS OF GUESTS FROM ACROSS THE U.S. CELEBRATE ANNIE SIMONIAN TOTAH AT THE ARMENIAN ASSEMBLY’S NATIONAL GALA 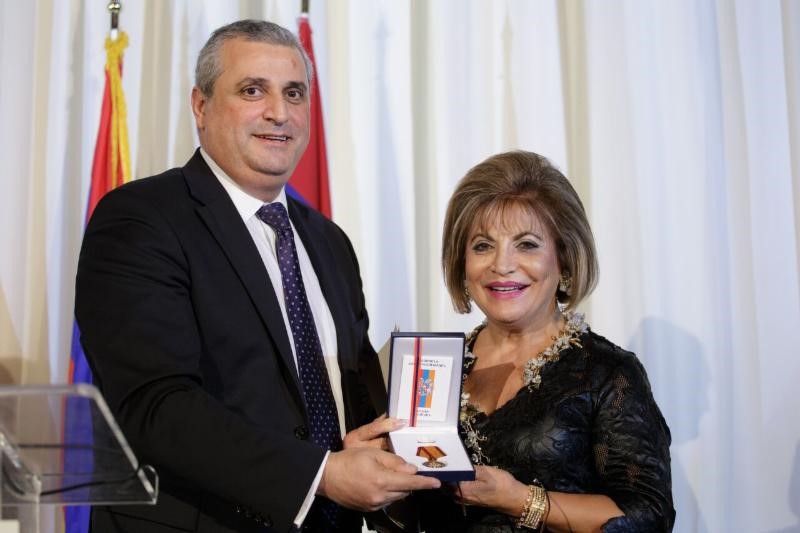 Nor Or, Los Angeles – Hundreds of guests hailing from sixteen different states across the U.S. attended the Armenian Assembly of America’s (Assembly) Gala honoring Annie Simonian Totah in Washington, D.C., closing out the Assembly’s National Advocacy Conference. Assembly President Carolyn Mugar and Co-Chairs Anthony Barsamian and Van Krikorian presented Totah with the Assembly’s Distinguished Humanitarian Award for her 40 years of advocacy for the betterment of Armenia, Artsakh, and U.S.-Armenia relations.

Totah also received the Movses Khorenatsi Medal from the government of Armenia presented by Armenia Ambassador to the United States, His Excellency Grigor Hovhannissian. The Movses Khorenatsi Medal is awarded for outstanding achievements in the spheres of culture, art, literature, education, social sciences, and sports. Ambassador Hovhannissian shared congratulatory remarks from Prime Minister Nikol Pashinyan thanking her for her devotion to Armenia and recognizing the Assembly’s leadership as a “forward-thinking organization [that] continues to be at the forefront of many critical issues.”

“I am truly touched and grateful to receive these two prestigious awards and to have the benefit of sharing the evening with so many wonderful friends and colleagues,” Assembly Board Member and honoree Annie Totah remarked. “I very much appreciate the honors and accolades bestowed upon me and it will be my privilege, my will of duty to continue with my advocacy work. I would also like to thank the many generous and wonderful sponsors and guests for helping ensure the success of our three day extravaganza,” Totah concluded.

“If you were to look up ‘Armenian excellence’ in the dictionary, you would see a beautiful photo of Annie,” stated Senator Markey. “She has spent her life fighting for recognition for the Armenian people and the Genocide. And tonight, we finally give her the recognition which she deserves, presenting her with the Distinguished Humanitarian Award. Annie has always been a trailblazer,” he continued. “Congratulations, Annie. Nobody deserves it more,” he concluded.

Senator Markey also spoke about the Armenian Assembly’s extensive work with Congress, noting the organization’s efforts in displaying the “orphan rug” and supporting Armenian Genocide legislation in the Senate. He noted Armenia’s peaceful transition and its strong democracy showcased this year, especially at a time when neighboring nations’ democratic values are “heading backwards.”

“This year marks the 30th anniversary of the Nagorno Karabakh Liberation Movement. This anniversary is an important reminder of how far the Armenian people of the region have come, but also how far we have yet to go. Since Azerbaijan launched its brutal offensive against Nagorno Karabakh, it is our duty to stand with the Armenian communities who remain to rest; it is our duty to end this sort of gruesome aggression against Armenian peoples; it is our duty to call out this violence for the crime that it is. As long as Azerbaijan continues to violate the ceasefire agreement and attack Armenians, the United States should cut off all military aid to Azerbaijan. Azerbaijan spends more on its military than the entire national budget of Armenia,” Senator Markey exclaimed during his remarks.

House Majority Whip Congressman Steny Hoyer spoke highly of the Armenian American community, and especially his experience working with Totah over the past three decades to strengthen U.S.-Armenia relations, where, he explained, she has been involved with “every step of the way.” He described her as a “force of nature” and “a woman of great inner strength that time and faith have not diminished, whose heroic heart has blessed us all, and who continues to strive, to seek, to find, and not to yield.”

“Annie has been involved in every aspect of the Armenian Caucus,” stated Rep. Pallone. “She was very influential to get Members to join in the very beginning. Needless to say, I don’t think there was ever a time when we were not trying to get the Armenian Genocide resolution passed when she wasn’t there – at the committee, outside the committee room, calling Members.” He added: “I cannot think of a time when she has not been involved.”

Congressman Pallone also shared a statement in the congressional record on behalf of Totah, stating in part: “For over 40 years, Ms. Totah has been a leading defender of human rights, and a local advocate of Armenia, Artsakh, and the Armenian American community.” On the House Floor, Congressman Pallone said: “I rise today to congratulate the Armenian Assembly’s 2018 Distinguished Humanitarian Award honoree, Ms. Annie Simonian Totah…I have known Annie throughout my entire congressional career and I can say without hesitation that Annie’s passion, dedication, and commitment to Armenia and Artsakh is unparalleled.”

In addition to the Prime Minister of Armenia, the Assembly also received congratulatory letters from Senate Democratic Leader Charles “Chuck” Schumer (D-NY), the leadership of the Congressional Caucus on Armenian Issues, the President of Armenia, Dr. Armen Sarkissian and the President of the Nagorno Karabakh Republic, Bako Sahakyan.

“I am grateful for the opportunity to express my admiration for the outstanding work of the Armenian Assembly of America and Mrs. Annie Simonian Totah,” Senator Schumer’s letter stated. “Thank you for your commitment and dedication in promoting democracy and representing the interests of Armenian-Americans. I know the Armenian Assembly of America will continue these efforts for many years to come,” he continued.

“Your voice is powerful and as the Co-Chairs and Vice-Chairs of the Congressional Armenian Caucus, it gives us great pleasure to commend the Armenian Assembly for its nonpartisan advocacy and successes over these many years, especially in strengthening the relationship between the United States and Armenia. We applaud the Assembly’s steadfast commitment in support of a strong and vibrant homeland free from blockades, at peace with its neighbors and secure in its borders,” the leadership of the Congressional Caucus on Armenian Issues said in a joint letter.

“I extend my congratulations to the Armenian Assembly of America on the occasion of its national Advocacy Conference and Gala in Washington, D.C., and for honoring a longtime champion of many causes on behalf of the Armenian people in their homeland and in the diaspora,” stated the President of Armenia, Dr. Armen Sarkissian. “We attach a great importance to the activities of the Armenian Assembly of America, the organization, which I know from the first days of its foundation. I am pleased to join you as you honor one of your long-time leaders, Annie Simonian Totah. She has been a pillar of the Armenian American community for many decades and her activism on many fronts has been a major service to our country and our people.”

“From the very beginning of the Karabakh Movement, the Assembly has stood shoulder to shoulder with us, and as we struggled for our very existence, the Assembly opened new corridors in the diaspora for our survival. In fact, the Armenian Assembly of America has an anchor in Washington for the Armenians of Artsakh,” Nagorno Karabakh (Artsakh) President Bako Sahakyan explained in his congratulatory letter. “Artsakh is proud of its long-standing friendship with the Assembly and is deeply grateful for its hospitality and leadership in America. With individuals like Annie Totah, and organizations like the Assembly, we are confident that the diaspora will continue to stand with us in defense of our freedoms and people,” he added.

The evening concluded with light-hearted and personal stories from three of Annie’s children – Nicole, Elliot, and Karina, reflecting on their mom’s dedication over the years, and her steadfast determination.

“On behalf of the Armenian Assembly, I would like to thank our special guests and all of our donors and supporters, including partner organizations AGBU and the Eastern and Western Diocese of the Armenian Church of America, for making the National Advocacy Conference a success and the Gala such a wonderful evening,” stated Executive Director Bryan Ardouny. “I would also like to thank our amazing Master of Ceremonies, Aram Bakshian, who kept the evening flowing smoothly with our featured speakers and the beautiful performance by Milena Oganesyan, giving the guests a special opportunity to experience Armenian dancing featured at this year’s Smithsonian Folklife Festival.”