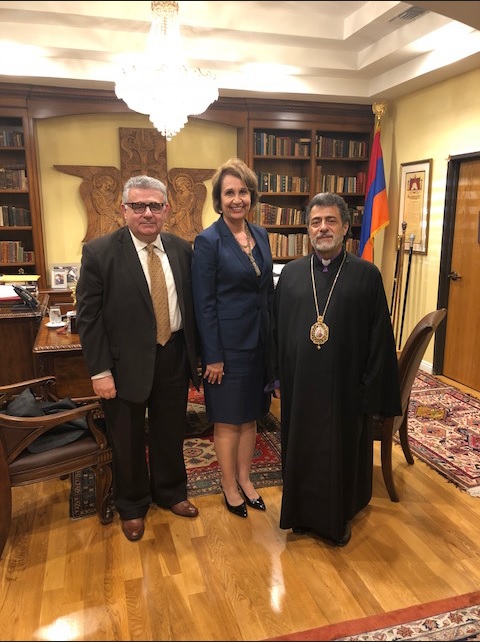 Referencing to the invaluable role of Glendale Adventist Medical Center in the community, Archbishop Derderian stated “Glendale Adventist Medical Center has distinguished itself as a leading hospital providing God’s love and divine comfort to its patients. It has been a commendable institution whose dedicated staff serve with humility, compassion, empathy, and care.”

The spiritual leader of the Armenian-Americans in the Western United States also reflected on the successful bond of partnership between the Western Diocese that have been evidenced throughout the years through collaborative functions. “Glendale Adventist Medical Center has annually commemorated the Armenian Genocide through a special prayer service, paying homage to the 1.5 million Armenians who perished during the first genocide of the 20th century. This most respectful gesture sends out to all, a strong message that life needs to be protected and honored, cherished and nurtured as it has been commanded by God.”

Each year on occasion of the Feast of the Nativity and Theophany of Jesus Christ, Archbishop Derderian and Diocesan clergy participate in the Blessing of the Water Service. In the Armenian tradition, the Feast Day commemorates not only the Birth of Christ, but also His baptism by John the Baptist. The latter is remembered through the “Blessing of the Water” service. The blessed water is then distributed to the more than 100 people including hospital staff, local officials and patients who participate in the service each year.

Archbishop Derderian extended his blessings to Mrs. Issai, reaffirming the Diocese’s commitment to working hand in hand with Glendale Adventist Medical Center and ensuring a prosperous future of collaboration between the two institutions.