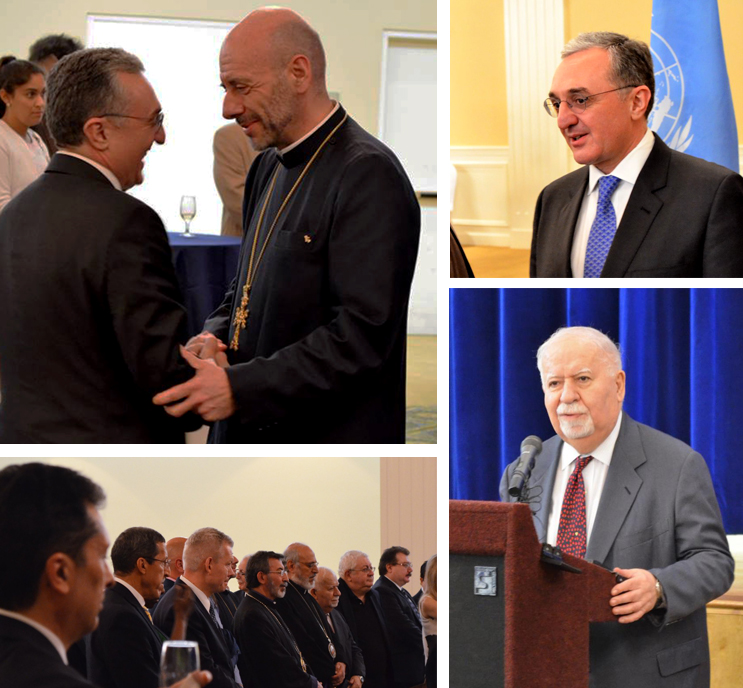 Nor Or, Los Angeles – July 20, 2018, marked a celebratory evening at the Eastern Diocese of the Armenian Church of America in New York City, as Armenia’s new Foreign Minister ZohrabMnatsakanyan was honored at a special reception in Haik and Alice Kavookjian Auditorium.

Diocesan Primate the Very Fr. Daniel Findikyan hosted the evening and welcomed the Foreign Minister—a longtime friend of the Eastern Diocese—and numerous dignitaries in attendance. These included Armenian religious leaders, ambassadors and diplomats from the United Nations, and leaders of the Armenian community and its organizations.

Among the guests in attendance were Archbishop KhajagBarsamian, Archbishop OshaganCholoyan, and the Very Rev. Fr. MesropParsamyan; United Nations Under Secretary-General for the General Assembly Dr. Movses Abelian; Armenia’s Deputy Defense Minister Gabriel Balayan; and some two dozen diplomats from the UN, including the Ambassadors of Canada, France, Iran, Greece, Hungary, Kazakhstan, Argentina, Finland, and Turkestan.

Dr. Vartan Gregorian, President of the Carnegie Corporation, addressed the enthusiastic crowd and called the Foreign Minster “an erudite gentleman born to be a diplomat.” He remarked that the event was an opportunity not only to honor the Foreign Minister, but also to bid him farewell as the highly respected Ambassador of Armenia to the United Nations.

“I do want to share in the responsibility in the good things that are happening in Armenia,” stated the Foreign Minister in his remarks. “Our objectives are very clear. They include democracy, the rule of law. We may be a small nation, but we are strong, and large in history, culture, and spirit.”

He called Armenia’s representation at the United Nations “strong, committed, and dedicated. We are a small nation, but at the United Nations each nation is represented as one. I represent a country and a proud people who have always had a strong sense of justice, faith in humanity, international cooperation, and peace,” he said with emphasis.

For their generous help to Armenia’s Mission to the United Nations, he paid a special tribute to Nazar and Artemis Nazarian, to Dr. Raffy and ShoghagHovanessian, and to TorosMangasarian. Turning to the large crowd, he stated with a smile, “I look forward to seeing you all in Yerevan.

During his visit to New York, Minister Mnatsakanyan met with UN Secretary-General Antonio Guterres, who stated to the Armenian diplomat that he was impressed by the recent developments in Armenia and the changes that have resulted. The UN chief said the world body is ready to help Armenia’s further development in ways necessary to the nation.

The Foreign Minister replied that Armenia considers cooperation with the United Nations very important. He detailed the Armenian government’s priorities, including reforms in justice, the rule of law, fighting corruption, and improving and providing equal opportunities in the social and economic fields.

Minister Mnatsakanyan also stressed Armenia’s commitment to the peaceful settlement of the Karabagh conflict under the auspices of the OSCE Minsk Group, and emphasized that Karabagh’s status and security are top priorities during the negotiations.

Considered one of Armenia’s most experienced diplomats, ZohrabMnatsakanyan (who holds the rank of Ambassador Extraordinary and Plenipotentiary) has served in Armenia’s Embassy in Great Britain, as head of the Foreign Relations Department of the Armenian President’s staff, Permanent Representative of the United Nations Geneva Office, Ambassador to Switzerland, and Permanent Representative to the Council of Europe. He is well-known to the New York Armenian community from his recent impressive service as Armenian UN Ambassador.

The elegant reception at the Diocesan Center to welcome Foreign Minister Mnatsakanyan was organized by Armenia’s Mission to the United Nations, led by the Mission’s Chargé d’Affaires, MherMargaryan.