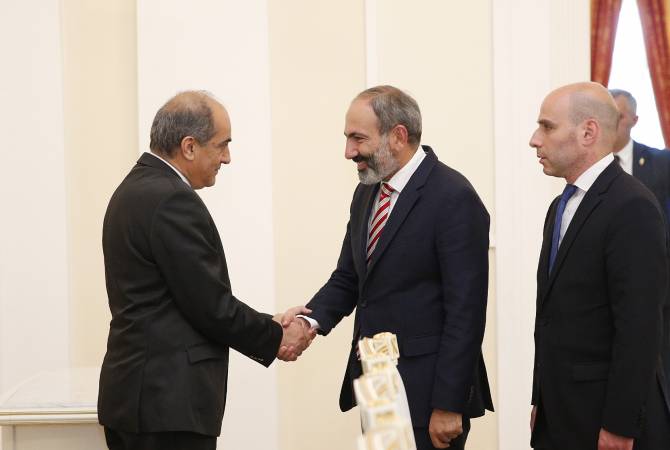 Prime Minister of Armenia Nikol Pashinyan received the delegation led by President of the House of Representatives of Cyprus Demetris Syllouris on May 22.

As ARMENPRESS was informed from the official website of the prime minister of Armenia, greeting the guests PM Pashinyan noted that the relations of Armenia and Cyprus have historical roots and the two peoples always had a warm attitude towards each other.  “I am happy to record that our countries have common positions on regional issues. I highlight the role of Cyprus in the international recognition of the Armenian Genocide and condemnation and prevention of genocides”, Pashinyan said. He also appreciated the position of Cyprus on Nagorno Karabakh conflict and the support for the efforts of the OSCE Minsk Group Co-chairs. The Head of the Executive underlined that Armenia is interested in further development of political, economic and security partnership with Cyprus and highlighted cooperation with Cyprus also in the sidelines of Armenia-EU relations.

The President of the House of Representatives of Cyprus congratulated Nikol Pashinyan on the occasion of being elected Prime Minister of Armenia and expressed confidence that the cooperation between the two states will gain a new impetus. “Be sure that we will assume the role of the representative of Armenia in the European Union and will try to make steps in the direction of the ratification of the Comprehensive and Enhanced Partnership Agreement and the visa liberalization process”, Demetris Syllouris said.

PM Pashinyan and Demetris Syllouris highlighted the development of trilateral cooperation between Armenia, Cyprus, and Greece and hoped that the sides will continue to actively work in this direction.

Nikol Pashinyan asked to convey his warm greetings to the President of Cyprus Nicos Anastasiades, reaffirming the invitation to participate in the 17th summit of Francophonie in Yerevan in autumn.

During the meeting, the sides also referred to a number of issues of mutual interest.