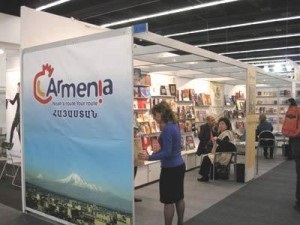 From October 14 to 18, Armenia will participate in the Frankfurt Book Fair with a separate pavilion, reports the RA Ministry of Culture.

The fair will showcase books released in Armenia and abroad, particularly Germany over the past couple of years, including nearly 300 books published by state order and with government support, as well as books published at the initiative of private publishing houses. Books devoted to the Armenian Genocide will be showcased in a separate section of the pavilion.

The Armenian delegation will include several publishers and publishing houses, including Antares, Zangak and YSU Publishing Houses, Bukinist Book Store, First Literary Agency and others.

Armenia is participating in the Frankfurt Book Fair with the support of the RA Ministry of Culture and the State Commission on Coordination of the events dedicated to the 100th anniversary of the Armenian Genocide.