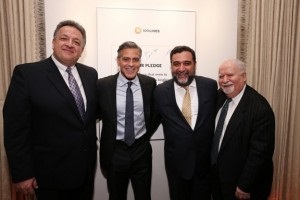 The Aurora Prize for Awakening Humanity was officially launched last March, in New York, by Vartan Gregorian, Noubar Afeyan and Ruben Vardanyan, the co-founders of the 100 LIVES project.

Starting next year, the Aurora Prize will be awarded annually to a person, or a group of people, who made an exceptional impact on preserving human life and advancing humanitarian causes.

Although the initiative is linked to the 100 LIVES project, that celebrates those who helped Armenians during the genocide a hundred years ago, the Aurora Prize is a worldwide endeavour, aiming to highlight inspirational stories of yet unknown women and men around the world who put themselves at risk to save others.

The emphasis is really put on sharing the stories of individuals who stood up against hatred, mistreatment, violence, murder and massacres so that they are remembered and their example followed. When those stories are put forward, we are reminded that in the worst of times, it is up to us to what footprint we want to leave behind. With that in mind, it is telling that the Prize was named after Aurora Mardiganian, an iconic figure of Armenian history. Aurora was only 15 years old when she managed to escape the Armenian Genocide and find refuge in the United States. She was among the first to tell her story in a memoir published in 1918, and to make her voice heard so that the atrocities committed would not be forgotten.

Even in the darkest hours of human history, there are glimmers of light. A hundred years  ago many courageous people stepped forward to help Armenians when they needed it most. Thanks to their actions a people survived, against terrible odds. Now generosity lives in the heart of every Armenian. Now, one hundred years later, it’s time to share these stories. — 100 Lives

The Aurora Prize shares a few characteristics with other awards – a selection committee comprised of very well-know humanitarians, a $100,000 award, and the possibility for the public to participate in the nomination process. The specificity of the Aurora Prize resides in the fact that the recipient will also be presented with a grant of 1 million US dollars, that they will donate to a charitable organization that inspired their work. The objective here is to encourage the circle of giving, and actually invest in the organizations that inspire acts of humanity. By doing this, the Aurora Prize aims not only at honoring individual instances of outstanding sacrifice but also at supporting ongoing dedication.

The selection committee is composed of nine awe-inspiring individuals, all known for their commitment to humanitarian causes. The Armenian community knows Vartan Gregorian for his involvement in the 100 LIVES project, and for his role as the President of the Carnegie Corporation of New York. Four Nobel peace prize laureates also sit on the selection committee: author Elie Wiesel, former president of Costa Rica Oscar Arias, human rights lawyer Shirin Ebadi, Liberian peace activist Leymah Gbowee. Ireland’s former president Mary Robinson, as well as Australia’s former Minister for Foreign Affairs Gareth Evans are involved in the committee as well. Last but not least, actor and filmmaker George Clooney, will participate in the selection and personnally award the prize to the recipient in April 2016. Mr Clooney is the co-founder of Not On Our Watch, whose mission is to put global attention on the impact of genocides and mass atrocities around the world.

In an Huffington Post op-ed, Aurora Prize founders Ruben Vardanyan and John Prendergast emphasized that when crimes against humanity are thwarted, it is thanks to individuals who are not afraid to do what’s right. The stories of those who stood up selflessly in the face of abject cruelty have to be broadcast globally, so we can honor them, be inspired, and ensure the continuation of their legacy.

Anyone can help find those hidden stories of exceptional bravery. Do you know someone who risked their live to save others? Who really had a positive impact on their community? You can help make their story known by nominating them on the 100 Lives website: https://100lives.com/en/prize.

The Aurora prize ceremony will be held in Yerevan on April 24, 2016.