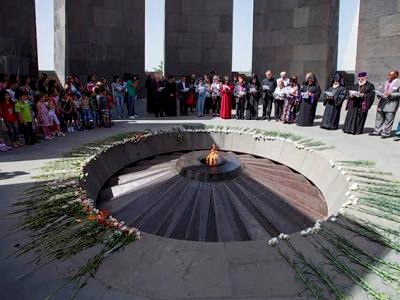 The executive committee recalled the Minute on the 100th Anniversary of the Armenian Genocide adopted by the WCC 10th Assembly in 2013 in Busan. This important action by the 10th Assembly followed many other occasions on which the WCC Commission of the Churches on International Affairs (CCIA) had called for recognition of the Armenian Genocide by the United Nations (UN) and by member states, dating back to the 1979 session of the UN Human Rights Commission. The WCC has played a key role over many years in accompanying the Armenian Church in speaking out and working for recognition of the genocide, and for appropriate responses to the genocide’s continuing impacts on the Armenian people.

A minute adopted at the 6th Assembly of the WCC held in 1983 in Vancouver acknowledged that “The silence of the world community and deliberate efforts to deny even historical facts have been consistent sources of anguish and growing despair to the Armenian people, the Armenian churches and many others.” While some continue their efforts to deny or minimize these historical events, the executive committee is greatly encouraged by His Holiness Pope Francis’ public recognition on 12 April 2015 of the mass killing of an estimated 1.5 million Armenians as genocide. “We stress that there is a duty on the international community to remember the victims of genocide, in order to heal these historical wounds and to guard against similar atrocities in the future,” the WCC said in a statement.

The WCC, with its many member churches, has participated in several events marking the centenary, including the official commemoration of the 100th Anniversary of the Armenian Genocide and canonization of the martyrs in Yerevan, Armenia, on 21-25 April. The WCC and its member churches will continue to participate in the ongoing centennial commemorations this year by the Armenian Diaspora, including with the Armenian Church Holy See of Cilicia in Antelias, Lebanon, on 18-19 July. In their statement, the Executive Committee thanked the many member churches and ecumenical partners around the world that have observed or will observe this ongoing centenary in their own contexts, and that have spoken in recognition of the genocide and in commemoration of its victims. “Through these commemorations, we acknowledge that these tragic events occurred, and that they must be named by their right name,” the statement said.